Did I say Ted Cruz?

Sorry, I meant Barack Obama. You know, the guy who repeatedly bleated "I WILL NOT NEGOTIATE" over delaying any aspect of Obamacare's oppressive and capricious mandates.

Guess what? Obama has decided to delay Obamacare's oppressive and capricious mandates. Of course, it has absolutely nothing to do with Healthcare.gov, the only website ever built that crashes in 150 languages. 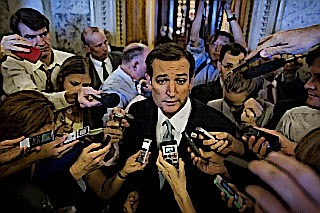 The Obama administration said Wednesday night that it will give Americans who buy health insurance through new online marketplaces an extra six weeks to obtain coverage before they risk a penalty...

...Administration officials said the change is unrelated to the many problems that the marketplace’s Web site, HealthCare.gov, has had in its first three weeks. Instead, they said, the shift relates to what they called a “disconnect” among dates in new rules for buying coverage...

...under the new rule, anyone who buys coverage during the open enrollment period will avoid a penalty, whether their coverage has started by April 1 or not. Administration officials said Wednesday that they will issue formal guidance in the next few days about the change. An HHS official said it remains unclear whether the deadline shift will apply to Americans who buy insurance without using the exchanges...

You know how the White House used human props a few days ago to advertise how great Obamacare was working?

Why don't Republican leaders (I know, an oxymoron) arrange a virtual town-hall meeting of the millions of Americans who have lost their health insurance thanks to Obamacare?

I mean, if a single blogger like Matt Walsh can do it, perhaps even the feckless RINO establishment can pull it off.