Random thoughts that popped into my head while working out:

• Obama could have thrown a bone to Republicans and negotiated a one-year delay of Obamacare's individual mandate; this would have allowed him to save face given his malfunctioning HealthCare.gov website. But his hubris, narcissism, and thirst for power prevented him from negotiating in good faith or even giving an inch on his "signature achievement". 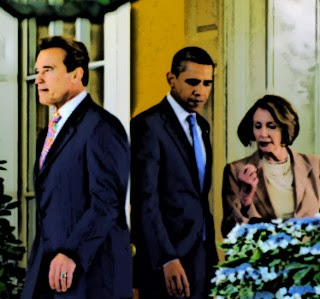 • If Obamacare continues to torture the American people with huge price hikes, forced unemployment, technical glitches, and mass instances of identity theft, the one man who fought it for 21 hours on the Senate floor will come out looking more like a hero than ever. That man, of course, is Sen. Ted Cruz.

• If the "Tea Party extremists" and Constitutional conservatives represent such a small fraction of the Republican base, perhaps the geniuses in the GOP leadership can explain why their candidates always run as conservatives (see: Ayotte, Flake, McCain, et. al.).

• It's fun to call Democrats Detroit-o-crats and then watch their faces turn into mottled shades of red and purple once their reptilian brains process all of the syllables.

• Kathleen Sebelius says Obama's Healthcare.gov website supports 150 different languages. If true, it would make the website the first ever to malfunction in 150 languages. *

• Arnold Schwarzanegger wants Americans to pass a Constitutional Amendment making it possible for a foreign-born person to become President. He should just change parties, because it's already legal for Democrats **.


* Hat tip: Mark Levin
** I'm not a birther, but Barack Obama is; and I would love to see his college transcripts.

'once their reptilian brains process all of the syllables.'

Since when are their brains able to process that many syllables?

Schwarzenegger should be supporting a Constitutional amendment to allow married sitting Governors to @#$% their maids. Then he would still have his reputation.

Schwarzenegger thinks the translation of his name plus his past association with the Kennedy crime family, will translate into immunity from his nefarious actions, like Sharpton, Obama, Jackson, Holder, Crump/Parks, Trayvon and parents, etc.

Man, I am tired of the IANAB pronouncements. How effective was the pushback to have right wing bloggers falling all over themselves to get distance from the yeoman work Joe Arpaio did. Considering that the Selective Service registration card stinks worse than the Birth Certificate, I don't see where all the squeamish Nancy boy fear comes from.

Anon 8:09 - I explain why IANAB here. The newspaper account of O's birth in Hawaii is enough for me.

I believe, however that O pretended to be of foreign birth to sleaze his way into Columbia and perhaps Harvard, which is why he won't release his transcripts.