During today's testimony regarding her botched Obamacare rollout, CNN did itself proper with coverage of HHS Chief Kathleen Sebelius's outrageous lies. You might call this "real-time repudiation." Or "split-screen smackdown": 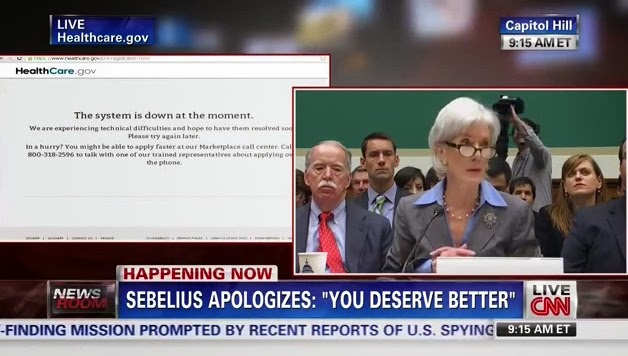 Secretary Sebelius: Yes, sir, because we were anxious to get the website up and running and functional, which we clearly have failed to do to date, although I would suggest the website has never crashed. It is functional, but at a very slow speed and very low reliability and has continued to function. Having said that, they pared down some of the features, feeling that it would be better to load them in later. One was the shop and browse feature. Another was the Spanish version of the website and the Medicaid transfers. All three of those issues were pared down in September to not load the system.

While Sebelius was insisting -- under oath, mind you -- that the website had "never crashed", CNN used a split-screen to show the Healthcare.gov website in real-time.

And... surprise! It had just crashed again, for the umpteenth time, displaying an error message "The System Is Down At the Moment ... Please try again later."

The true destructive impact of Obamacare -- even though 80 percent of Americans are covered by their employers and are not yet subject to the individual mandate (won't that be fun next year?) -- has become apparent to most Americans.

This woman would never have been hired in the private sector to run such an endeavor, let alone be fired for incompetence. The outright lying that our "President" has engaged in is sickening as well, but his transformation of this nation into a Third World welfare nation is not yet complete.

Expect the low information voters to blame the insurance companies, and all Republicans when they see the cost of this leftist wet dream.

Can I make a suggestion?

'The Coverage is too damn low.'

" even though 80 percent of Americans"

Just FYI, its really 58% in the employer provided insurance market. 195 million or so, 110 million policies with 85 million dependents.

There's about 30 million in the individual market.

Most of the rest are on Medicare or Medicaid. That gets you well above 80%, probably safely above 90% if you exclude illegal aliens.