Do these people realize how idiotic they sound? They're slamming the construction of the central Obamacare website because it was built by a monolithic, authoritarian, centralized leviathan instead of lean, agile, efficient private sector entities?

Did they ever stop to consider this website is Obamacare in microcosm? 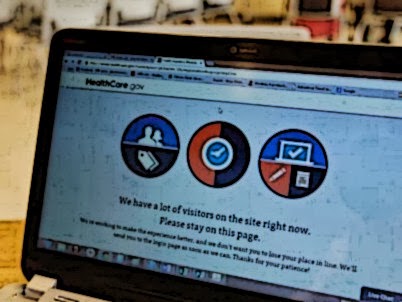 ...it's clear that the site itself isn't well constructed: IT professionals told the Wall Street Journal that in addition to specific pieces not working, the whole thing was "built on a sloppy software foundation," potentially due to the haste with which code was written. Slate described just how difficult it is to coordinate multiple contractors creating different components of a complex Web portal.

Evan Burfield, who founded the relatively small company that worked with CGI to build Recovery.gov, says the problem lies more in a federal procurement apparatus that makes it nearly impossible for an agile newcomer to bid on projects that in the private sector would take much less time and money. Plus, with so many contractors, everyone could technically fulfill the requirements in their statement of work, and the thing can still not work in the end.

"If it had been a $4 million Web site, it would've had higher likelihood of being a success," Burfield says. "It's not just CGI. It's any collection of government contractors, if you put them together, will find a way to put together something complex enough to justify $400 million."

Oh, and this is the best part: your brilliant federal government hired a foreign company that outsources IT jobs to India to create a complete clusterbungle of a website that only collects your most personal and private data.

This, my friends, is the Democrat Party in action.

Well, if your entire objective in the first place was single-payer, this makes sense. It'll be so complicated the fool voters will soon be begging for simple, full government coverage. These people are, contrary to what you think, not stupid. Socialism is the goal. How they get there is irrelevant. There are no points for form. All that matters is winning.