OF COURSE NOT: Feds won't investigate Tesla even though electric sedan caught fire after running over road debris

U.S. auto safety regulators decided against opening a formal investigation into a Tesla car fire that started after the vehicle ran over debris on a Washington state highway. 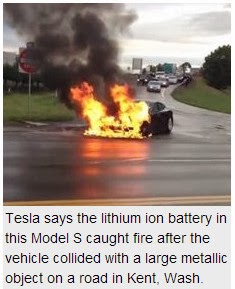 The National Highway Traffic Safety Administration, in an e-mailed statement, said it found no evidence the fire resulted from a vehicle defect or violations of U.S. safety standards.

NHTSA didn't send investigators to the scene of the Oct. 1 fire involving one of the plug-in electric carmaker's Model S sedans because it was the first day of a 16-day U.S. government shutdown. After consulting with the company, regulators decided not to begin their investigation process, which can lead to recalls.

NHTSA Administrator David Strickland on Oct. 22 said the agency was "gathering data" on the fire, which destroyed the Model S.

A Tesla spokeswoman said the carmaker had no immediate response to NHTSA's decision.

Regulators formally investigated fires in two other battery-powered vehicles, the Chevrolet Volt and the Fisker Karma. Both of those investigations led to recalls.

The lithium ion battery in the Model S caught fire after the vehicle collided with a large metallic object on a road in Kent, Wash., Tesla has said. CEO Elon Musk defended the car's safety in an Oct. 5 blog post, saying it was an unusual crash that would have resulted in a fire in a gasoline car as well.

Is it just me, or is it getting hot in here?