Rumor on the Hill has it that Senator "Little" Dick Durbin (D-IL) is the single most despised member of the U.S. Senate of either party. He is said to have lied repeatedly to other Senators during a variety of critical negotiations. Now he is embroiled in a tête-à-tête with the White House. It began when he alleged that an unnamed Republican insulted President Obama to his face. 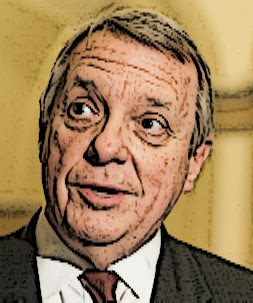 A top Senate Democrat said that a leading House Republican told President Obama that they could not ‘even stand to look at you’ during negotiations over the government shutdown...

...Spokesmen for both Speaker John Boehner and Majority Leader Eric Cantor say neither official said or remembers anyone else saying they couldn’t stand to look at President Obama at a White House summit during the government shutdown, as Democratic senator Dick Durbin of Illinois alleged...

Annnnd here’s the confirmation of the denial from… the White House:

JAY CARNEY: I will say this, I spoke with somebody who was in that meeting and it did not happen.

I love this stuff
Heads are exploding!

Update: I didn't see the part that said Durbin stands by his comments, AFTER the White House denial. So I amend my statement to say this: