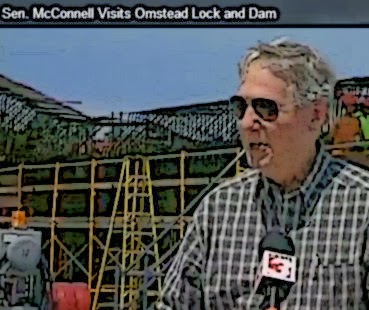 A proposal to end the government shutdown and avoid default orchestrated by Republican Leader Mitch McConnell and Democratic Leader Harry Reid includes a $2 billion earmark for a Kentucky project.

Language in a draft of the McConnell-Reid deal (see page 13, section 123) provided to WFPL News shows a provision that increases funding for the massive Olmsted Dam Lock in Louisville from $775 million to nearly $2. 9 billion.

The dam is considered an important project for the state and region in regards to water traffic along the Ohio River.

...Asked about the additional funding in the proposal, McConnell spokesman Robert Steurer directed all questions to lawmakers who worked on the bill directly.

Oh, that clears everything up. I'm sure you have clean hands on this, Mitchie.

Let's get the #McConnellBribe hashtag trending, my friends.

Oh, but Ted Cruz is the extremist.

Folks, here's a heads up from a financial guy I know. Interest rates will soon be returning to their historical mean -- if not higher. Because of the short-dated maturity of our debt (don't ask about that particular insanity, just work with me here), our debt service levels will basically quadruple when that happens.

The system is a few years away from this -- best case.

Instead of holding together his caucus and patiently explaining the situation we're in, McConnell hides in the shadows, sends John McCain and Olympia Snowe out to do his dirty work, and essentially props up Barack Obama.

Mitch McConnell was just outsmarted by Valerie Jarrett. Which tells you everything you need to know about him.

Oh, but the can got kicked for few more months. Awesome.

We're walking right up to the cliff and GOP leaders don't seem to care a bit.

Maybe they're part of this fundamental transformation we keep hearing about.

There is a gathering storm of conservatism fueled by math, logic, reason and history.

McConnell is a complete sellout.

There is a gathering storm of conservatism fueled by Americans.

There is a gathering storm of conservatism and November is coming.


If you've had enough, support Matt Bevin for U.S. Senate in Kentucky

There is not doubt left that McConnell, Mc Cain, Grahm, King, Corker, etc. have told the American public to bend over and take it in the ass. I'm thinking now may be the time to get the pitchforks sharpened.

Only sane people will help rid ourselves of the likes of these Un-American parasites, and the time to act is now, fill McConnell's phone lines until they have to shut them down, and let him know what you think of him. I will!

It should not become evident to all of us that with the GOP being corrupted, we now live in a banana republic.

We have but one hope: the patriots of the Tea Party. We need to become one of them, and NEVER vote for a GOP candidate again. "Republican" should be as dirty as word as "democrat"

Time to start working on those "Liberty Amendments" (see Mark Levin). It's our only path via Article 5 of the Constitution to wrest control of this lawless, essentially single-party system out of the hands of these progressive statists.

Cut Mitch some slack.
I'm sure he would have sold out for much less