In a letter to the EPA, the Institute for 21st Century Energy and 13 state and local business organizations call out the agency for not living up to its own policies on the location of listening sessions on greenhouse gas emissions rules for existing power plants:

EPA has chosen to locate most of these hearings in states and regions that use very little coal, while neglecting states most dependent on coal for affordable and reliable electricity generation. For example, EPA is not planning listening sessions in any of the 10 states most reliant on coal for electricity generation, instead choosing states such as California (1% of electricity from coal), New York (4%), and Washington (4%). 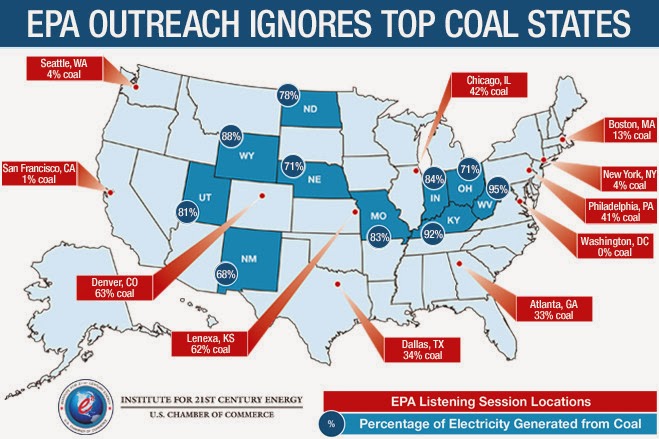 So far, EPA isn’t living up to this standard.

The business organizations ask EPA to reach out to--not ignore--states that are most dependent on coal.

Greenhouse gas emission rules, expected to be released by EPA next year, will greatly affect coal producers and electricity users. It’s critical that all affected parties be able to give their input to the agency.

This war on coal, like the Unafordable Health Care Act, is just another facet in the utopian leftist goal of controling our behavior.

I pity these people if the American public gets discusted enoughto take up arms against those dictating to us, as they will be hunted down like dogs.

Amusing to hear these dolts, our social cripples announce they are the ones we should hold responsible when in fact they are not elected representatives; and their mia culpa is really a fungu.