I daresay that anyone reading the old, failed Newsweek Magazine -- now renamed The Daily Beast -- is well aware of Mark Levin. Levin, the author of five New York Times bestsellers and the president of Landmark Legal Foundation, is heard by roughly 10 million people each week.

Yet someone named "David Freedlander" -- if that is his real name -- begins a lengthy article with the bizarre assertion that a wide swath of Democrats, liberals and other miscreants are unfamiliar with Levin. I assure you that's not the case. Entitled "Radio’s Mark Levin Might Be the Most Powerful Conservative You Never Heard Of", his amateurish "exposé" is riddled with typos, grammatical gaffes, and problematic diction: 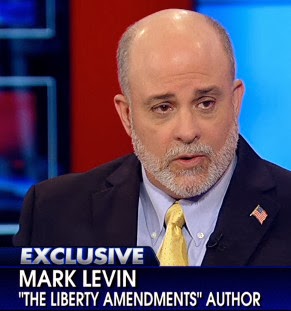 "Form"? Is that a new turn of phrase? Or just the hastily typed missive of a hack?

Is that a question?

The article is flatly embarrassing, but -- frankly -- not unexpected for a magazine that was recently sold for a tidy, shiny silver dollar.

I suspect if Levin had known how pathetic Freedlander's writing skills were, he'd never have agreed to spending time discussing economics, philosophy, law and history with him.

Here's a heads up, David. The reason Levin and other conservatives have mobilized millions is because we are losing our country.

Democrats are openly calling for the arrest of their political opponents.

The administration has tripled warrantless wiretaps of U.S. citizens (according to the ACLU) and is data-mining all of the phone records of 300 million Americans.

The president lied -- repeatedly -- to the American people about the murder of a U.S. ambassador and has never revealed what actions he took when first informed of the terror attack.

The Obama White House also unquestionably used the IRS to target its political opponents prior to the 2012 reelection campaign; this was one of the proposed articles of impeachment against President Richard M. Nixon.

The president ignored the Senate's advice and consent role, becoming the first to unilaterally declare the upper chamber in recess over a long weekend to name radical leftists to the National Labor Relations Board. This lawless act was completely rejected by two separate U.S. Courts of Appeal.

The administration also was held in contempt of Congress for unlawfully hiding documents on its "gun-walking" program in which Eric Holder's Justice Department knowingly sent thousands of firearms and grenades to Mexican drug cartels. This effort was clearly intended to demonize American gun-owners and set the stage for further erosion of the Second Amendment.

The administration has become increasingly hostile to the press, targeting wide numbers of journalists at the Associated Press and even wiretapping the parents of Fox reporter James Rosen.

The White House even "developed its own network of websites, social media and even created an online newscast to dispense favorable information and images," an act unprecedented in American history and consistent with the actions of a dictatorship.

So, Davey -- can I call you, Davey? No? Too bad -- we regular Americans see that we're in the process of losing our country to fanatical, hard left progressives that are doing their level best to install what can only be called a fascist government in the United States.

This isn't the Democrat Party of JFK, a tax-cutting advocate for strong national security. The Democrat Party is now controlled by radical sixties retreads who continue expanding the welfare state even as the country runs up massive deficits. These tactics are called "Cloward-Piven Government" and are naked attempts to destroy capitalism.

The facts are unassailable.

Because he is cognizant of history, facts, logic and reason -- and Freedlander clearly is not -- Levin has attracted millions of like-minded Americans who worry about massive deficits, lawless presidents, and a Beltway elite that is more concerned with the needs of illegal aliens than their own constituents.

David Freedlander's writing appears to be consistent with the level of his intellect, which is to say: he's a drone.