Or, as I prefer to call it, ObamaCouldn'tCareLess. Both articles are must-reads (as well as the comments, which are hysterical - accusing, for instance, the Times of acting at the behest of Fox News or Rush Limbaugh). 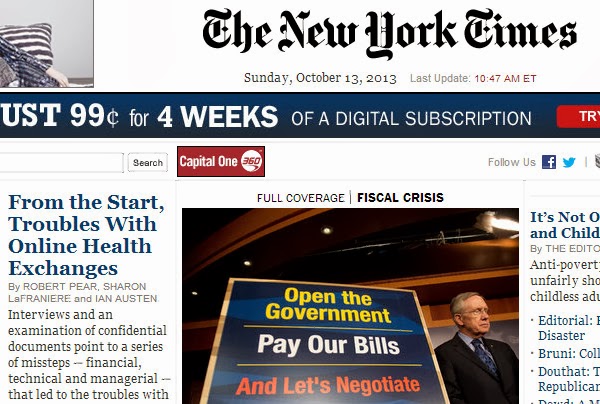 [Link]: “These are not glitches,” said an insurance executive who has participated in many conference calls on the federal exchange. Like many people interviewed for this article, the executive spoke on the condition of anonymity, saying he did not wish to alienate the federal officials with whom he works. “The extent of the problems is pretty enormous. At the end of our calls, people say, ‘It’s awful, just awful.' ” ...

...Administration officials dug in their heels, repeatedly insisting that the project was on track despite evidence to the contrary...

Dr. Donald M. Berwick, the administrator of the federal Centers for Medicare and Medicaid Services in 2010 and 2011, said the time and budgetary pressures were a constant worry. “The staff was heroic and dedicated, but we did not have enough money, and we all knew that,” he said in an interview on Friday.

Not enough money? Apparently, borrowing 40 cents of every dollar it spends isn't enough for this government. There's never enough money to get a doddering, incompetent, bloated, obese, monopoly of a federal government to work as efficiently as the free market.

[Link]: Adam Weldzius, a nurse practitioner, considers himself better informed than most when it comes to the inner workings of health insurance. But even he wasn't prepared for the pocketbook hit he'll face next year under President Barack Obama's health care overhaul.

If the 33-year-old single father wants the same level of coverage next year as what he has now with the same insurer and the same network of doctors and hospitals, his monthly premium of $233 will more than double. If he wants to keep his monthly payments in check, the Carpentersville resident is looking at an annual deductible for himself and his 7-year-old daughter of $12,700, a more than threefold increase from $3,500 today.

Gee, who could have predicted that a 2,200-page bill that no one read before voting on would have resulted in an unworkable disaster?

The NYT headline should read "From the Start, Troubles With Online Wealth Exchanges".