Though they don't seem to realize it, John Boehner and Republican leaders in the House have President Obama and the Democrats in a political chokehold. Boehner need only keep the government shuttered (actually, the 17 percent of government deemed "non-essential") until Obama capitulates. How do I know that Obama will capitulate?

1. The massive, furloughed federal bureaucracy is the Democrat Party. Every day that goes by during the shutdown, the louder the cries will grow from the furloughed masses of (mostly) Democrats in the unelected fourth branch of government. The shutdown is inflicting direct pain on the Democrat Party. The longer that pain is applied, the better. All of the pressure is on Obama to reopen government, despite the media hype. 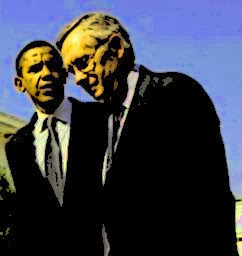 2. The conservative base is fired up. Go figure: actually taking a stand motivates the majority of Americans who identify themselves as conservatives. That includes most Republicans and a huge chunk of independents who have lost faith with the Nixon-Rockefeller-Bush wing of the GOP. Keeping the conservative base fired up wins elections. Standing and fighting wins elections. Winning on principle wins elections. We saw that in 2010; and we saw how well nominating another McCain/Dole centrist worked in 2012. If the GOP has a prayer of gaining ground in 2014, it must keep conservatives off the sidelines. And that is what Ted Cruz has done.

3. The shutdown reveals how little the federal government matters to us. Outside the Beltway, the impact of the shutdown is almost non-existent. Consider a government that has nearly a million "non-essential" employees: each and every day the federal behemoth remains shuttered is a day reinforcing how ridiculously huge and useless much of the leviathan has become.

4. The shutdown reveals how petty and spiteful this administration is. It took more effort for the National Park Service to build barricades around the World War II Memorial to keep veterans out than to staff it during normal operations. All over the country, the NPS and other elements of the government engaged in unprecedented activities to inflict pain on the American people. What better way to remind Americans that -- unless it is stopped -- this petty and spiteful administration will soon control the entire health care industry.

5. Because it's the right thing to do. We are watching the fiscal destruction of this country. How else can one phrase it? When interest rates return to the mean, the federal government's reckless spending policies will instantly quadruple the amount it must pay to service the debt. What happens then? It's anyone's guess, but one thing is certain: all of the outcomes are bad, ranging from another Great Depression to a complete collapse of the civil society.

Call your representative now and tell them to stand strong. They have Obama and the Democrats pinned. Now they can just wait for the three-count.

No increase in debt limit means O will have to cut spending to 2001 levels. Or else unilaterally declare he can raise the debt ceiling -- openly declaring himself king, supported by Democrats.

Which should remove a lot of blinders and be one of those "teachable moments". As well as an impeachable offense.

Doug, I have not been able to reach any of our representatives since the shutdown began. How can we let them know what we want them to do if we can't reach them.

I would call their local offices (not the DC office), leave messages, and even drop by if you can.

When the shutdown ends, EVERY member of congress (GOP, Tea party) who held America hostage with this shutdown needs to be arrested, tried, and executed for treason.

You're a clueless putz, an inbred scumbag, a pathetic tool of the Left who doesn't understand simple math.

The guys "holding America hostage" are the ones who've rung up $600,000 in debt and liabilities for each American household.

The sane ones are the guys trying to get this bankrupt government under control.