California Democrat Cheers for One-Party Rule (Because Hitler Made the Trains Run on Time, Right @FromaHarrop?)

Some crackpot named "Froma Harrop" claims one-party rule is good for California, even as the state collapses into bankruptcy. Ralph sends along a link to Creators featuring someone with that name -- which, memory serves, is Latin for a certain highly contagious STD. And she simply adores one-party rule.

California has found a formula for ending the partisan warfare that once paralyzed its government: Get rid of one of the parties, in this case, the Republican. The state's famously dysfunctional government now hums with calm efficiency. 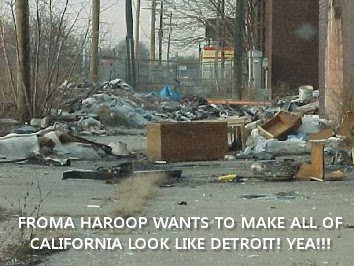 Yes, "calm efficiency". The trains run on time, one would assume. Oh, and Pol Pot had one-party rule, too. That didn't work out too well for, oh, a couple million of his subjects. Who we won't be interviewing for... the rest of their lives.

Democrats there hold a supermajority in the state Legislature, making it well-nigh impossible for Republicans to gum up their plans. The governor, Jerry Brown, is a Democrat, as well.

...As districts become more politically diverse, Republican right-wingers — with their inflamed imaginings and inexplicable amount of free time — see their power to produce sure losers curbed...

Yes, those damnable Republicans with their inflamed imaginings. Like the Constitution matters. Like individual liberties matter. Like trying to control an IRS, an NSA, a DOJ, and a Beltway Elite who are completely out of control. Imagine the nerve!

...Sacramento is now a model of quiet efficiency. The state's new health insurance exchange is off and running with minimal drama. And there's even a move to ease some environmental regulations at the behest of business.

"The new California health insurance exchange is running with minimal drama"? Perhaps Froma (Gesundheit!) should ask those affected by Blue Cross canceling roughly 60 percent of its individual insurance policies. Or the thousands of other horror stories so egregious even the Los Angeles Times has been forced to take note. Or the more than 10 million people nationwide who have thus far lost their policies.

Now if we didn't have Detroit, and Chicago, and Sacramento, and dozens of other bankrupt, one-party, Democrat-run cities collapsing into miserable microcosms of third-world cesspools, she might have a point to consider.

Yo Froma, if that is your real name, I have two suggestions: first, lay off the acid; and second, head over to PensionTsunami, where the true economic toll of the Detroitocrat Party is laid bare. Don't worry, they use words at the sixth-grade reading level, so you should be okay.

In short, the infernal alliance of public sector unions and their Democrat toadies have set California on a course of fiscal destruction. Businesses and taxpayers are fleeing, illegal immigrants who suckle on the public teat are welcomed, and Shmenga Hadoop thinks that model's sustainable.

So I'll take a flyer and trust Milton Friedman over Yenta Maloop: he said that combining open borders and a massive welfare state would bankrupt a country. And that is where California is headed as surely as as Freda Maloof is destined to be a footnote to a footnote to a footnote when the history of America's great op-ed writers is written.

Yo, Maroof: stop destroying my country!

A cult is a terrible thing to be in.

Froma Harrop, again? Ace of Spades HQ destroyed the Providence Journal's Froma Harrop back in August 2011. Just after President Obama said that we (meaning the right) should be more "civil," this president of the National Conference of Editorial Writers called the tea party "terrorists." This is just sad:

"Bitch Doubles Down: She actually claims that what she said is perfectly civil.

"She claims her statements are factual -- the Tea Party really is engaging in terrorism, hence this isn't incivil. It's just a fact."

In other news, Rush Limbaugh did a segment called "Obama Doesn't Know Jack." The NSA spying, the IRS targeting of the tea party, the failed Obamacare website--he knew when we knew. Later, Jon Stewart did a segment on the same theme. Obama just had no idea about these awful things. The lies keep on coming.

Yeah, unfortunately she isn't a California resident, but I wish she was. Cali, as bad as it is, wouldn't have the hag. This miserable crone has been pontificating from irrelevant RI for ever.