THEY LIED TO CONGRESS, AGAIN: After Three Days, HHS Knew Less Than 250 People Nationwide Had Signed Up for Obamacare

Of course the Obama administration lied to Congress. Of course they had the true number of folks who had signed up for Obamacare through the disastrously flawed Healthcare.gov website.

Marilyn Tavenner, head of the Centers for Medicare & Medicaid Services, testified Tuesday before the House Ways and Means Committee... raising more questions about the administration's transparency on the project, she declined to cite enrollment numbers. She did not claim, as Health Secretary Kathleen Sebelius recently did, that officials simply do not have those numbers -- rather, she said a "decision" was made to release them in mid-November.

They lied to Congress to hide their catastrophic failures.

One of the few real reporters left in legacy media is Sharyl Attkisson of CBS News. And her report is absolutely devastating, describing an administration whose first, second and third instincts are to lie. 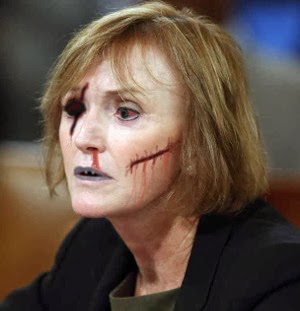 The website launched on a Tuesday... at a meeting Wednesday morning, the war room notes say "six enrollments have occurred so far."

By Wednesday afternoon, enrollments were up to "approximately 100." By the end of Wednesday, the notes reflect "248 enrollments" nationwide.

The lies and cover-ups keep coming.

Where are the Select Investigative Committees, Speaker Boehner?

Where are the Select Investigative Committees, Chairman Issa?

Benghazi, the IRS and Obamacare all deserve their own.

We, the American people, demand them!

Words can not convey the utter disgust I fell my hard work, the fruits of my labor, is confiscated to pay for dispicable creatures such as this woman.

I will never find words adequate to express the vile contempt, these people running my government, represent, for people like me, with their lies, prevarications and dissimulation's.


It is difficult at moments to accept the truth of the disregard, disrespect, and omnipotent air of elitism these people posses.

Who do these people think they are?

They think they are your rulers, and as such they fell compelled to make you do as they think you should do. Don't you understand? These people are "The Elite", and only they can lead you forward in your life, taking away all of those pesky decisions you would have to make concerning your own destiny.

Aren't you glad you are in good hands, and being taken care of? Right now over 50 million people think they are. Scary, isn't it?

Imagine if we didn't have a corrupt backstabbing coward representing us as Speaker of the House, instead of the pathetic lox representing the GOP...

The GOP is no longer our party. To make any investment in it will only result in another John Boehner being stuck in as its useless head and we patriots used for our votes, and then sold out again.
Like Charles Krauthammer finally got the message about Obama (is that indicative, or what?) we all need to get the message that as our party, the GOP is dead.

Tea Party, baby: it's all we've got left.

I hear you TFR!

You know The Tea Party is where it's at. The son of a bitches in power are trying to classify it as domestic terrorists.

The truth is The TP is a serious threat to the illegitimate bastards controlling OUR government.

The tyrants should be afraid. Afraid of what we will do to them for what they are doing to us.

This stick in the eye to all Americans may be the petard upon which these commicrats fall. It's possible that so few will sign up that the whole beast would fall over.

Our government and the press lie so much Liberty and the truth is an orphan.

Legitimacy as an integral function of honest government has been aborted with a coat hanger in a dark ally behind a dumpster filled with rancid grease from the white house kitchen.

Mike in Grasonville turned on a light bulb here. It's not just blacks that Obama is keeping on the plantation. It's all of us...even the elite...who have no direct use to him.

I don't believe he actually sees himself as "black". He was, after all, raised "white". I don't believe he identifies with any race, group or religion with the possible exception of Socialists. Even then, I think they're just a tool to him...another way of aggregating and keeping power.

Where was I? Oh, yeah--back on the plantation. It's nice here. They treat us pretty good if we behave. Maybe I'll just sit back on the porch and watch my freedoms walk down the road.

"War room" says everything you need to know about this cursed, tyrannical regime. They are at war with We the People.

And we must fight back!