BUT DON'T CALL IT A DEATH PANEL: Canada's Supreme Court rules a government board, not family, can pull the plug on patients

Health Care: Canada's Supreme Court has ruled that under the "law of the land" in Ontario, a government board, not the family or doctors, has the ultimate power to pull the plug on a patient. 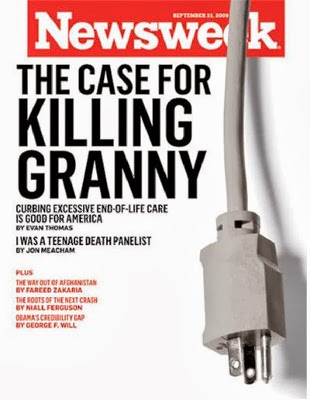 Lost in the discussion of defunding ObamaCare and the failed effort in Congress is the fact that failure means the government's ability to defund your life through the ObamaCare's Independent Payment Advisory Board (IPAB) remains. IPAB is regarded by many, starting with former Alaska Gov. Sarah Palin, as a death panel whose decisions based on cost effectiveness would result in health care rationing.

A glimpse of this brave new world can be had by casting a glance at our neighbor to the north. There, Canada's Supreme Court ruled 5-2 that under Ontario's Health Care Consent Act, which has been on the books for nearly two decades, doctors cannot overrule a family's wishes for an incapacitated patient regarding life or death decisions, but an administrative tribunal can.

In 1996, Ontario's provincial legislature created the Consent and Capacity Board, a body with the power to make the final decision when doctors and families disagree on keeping a patient alive with continued treatment or pulling the plug, a conflict that can result in endless legal battles.

At issue in the Ontario case was the fate of Hassan Rasouli, a retired engineer who suffered complications following brain surgery three years ago and has been in a vegetative state in a Toronto hospital ever since. Doctors say there is no hope of recovery but the family doesn't want to turn off life support.

The court ruled that the doctors could not overrule the family's wishes, but are able to appeal to the Consent and Capacity Board, which could. Canada has a full-blown single-payer system, which President Obama is undoubtedly aiming for. So the question of when it is cost-effective to treat or keep patients alive becomes more of a matter of space and budget rather than a medical issue.

The question of whether one's life is worth saving or one's condition is worth treating remains a key part of ObamaCare, even while being eclipsed by political maneuverings and enrollment difficulties. And having that decision made by a body such as IPAB has led to legislative efforts to pull the plug on ObamaCare itself.

Under ObamaCare, IPAB's board of 15 presidentially appointed "experts" will be empowered to make arbitrary Medicare spending-cut decisions with virtually no congressional oversight or control.

Its decisions will not be made on an individual level, but it will decide what treatments and therapies are cost-effective and therefore covered, affecting and possibly costing the lives of those in need of them.

We have documented for years how socialized medicine around the world, particularly Britain's National Health Service, makes centralized decisions based on cost-effectiveness rather than medical need, and how this has led to rationing and denial of service. People literally die while on waiting lists. ObamaCare tries to apply that same approach to Medicare through IPAB.

In a recent op-ed in the Wall Street Journal that Palin could have written, Howard Dean, former head of the Democratic National Committee, called IPAB "essentially a health care rationing body." The former physician said it "will be able to stop certain treatments its members do not favor by simply setting rates to levels where no doctor or hospital will perform them."

The frightening specter of government appointees deciding who lives and who dies by controlling the availability or withholding of treatment based on cost-effectiveness is a grim reality in Britain and Canada. Unchecked, it will happen here.