YES, VIRGINIA: There Really is a Conspiracy to Take Your Guns, Courtesy of Bloomberg and McAuliffe


Apparently, having billions of dollars in disposable income and being the mayor of America's most populous city (and let's face it, a place with problems of its own) isn't enough to keep billionaire Michael Bloomberg busy. We've often reported on his antics here in the Commonwealth of Virginia (see here, here, and here, for example), and we can thank him for at least one pro-gun law being on Virginia's books. 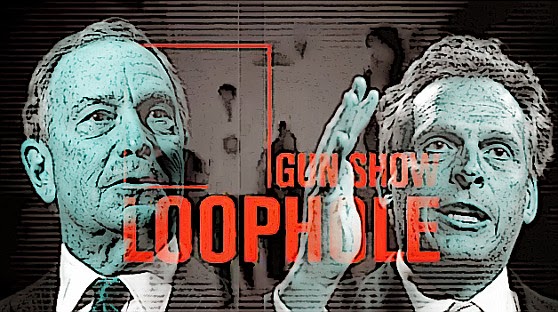 To no one's surprise, the billionaire buttinksi is back and throwing his considerable fortune behind an attempt to defeat NRA "A"-rated Republican Ken Cuccinelli and to elect NRA "F"-rated Democrat Terry McAuliffe in Virginia's upcoming gubernatorial election. Unfortunately for Bloomberg, while his money can buy a huge amount of negative advertising attacking Cuccinelli, it cannot alter basic facts. Even the Washington Post, normally a far friendlier outlet for McAuliffe and Bloomberg than the NRA, had to call foul at an ad Bloomberg is running that tries to fault Cuccinelli over the so-called gun show loophole. In its fact-check of the ad, the Post awarded Bloomberg's super PAC, "Independence USA," three well-deserved Pinocchios for bending the truth.

The ad claims that the "gun show loophole" means "anyone can buy a guy without a background check," including "the dangerously mentally ill" and "criminals." To underscore this point, it flashes pictures of several high-profile murderers who committed their crimes with guns.

The Washington Post takes issue with the ad on the basis that gun shows are rarely the source of crime guns and that none of the criminals pictured actually obtained their firearms at a gun show without a background check. Indeed, as the Post notes, three of the four pictured killers obtained their firearms through licensed dealers, passing background checks in the process. The fourth killed his own mother and then stole the guns he used from her.

In other words, the so-called "gun show loophole" had nothing to do with the murderers pictured. If anything, they represent the failure of the background check system Bloomberg and his puppets seek to expand.

As we have explained many times, the idea of a gun show loophole is a myth. The same laws that govern firearm sales anywhere else also apply at gun shows. Licensed dealers who sell firearms at gun shows must run background checks, just as they do at their business premises. Persons who are not dealers--that is, casual sellers making occasional sales and not operating for livelihood and profit--may also make sales at gun shows, just as they can at flea markets, garage sales, or in other private transactions. Once such sales rise to the level of a business enterprise, however, licensing requirements apply, and sales may only be conducted by the licensee after a background check.

Yet even private transactions are limited under federal law to purchasers residing in the same state, and a private seller is prohibited from transferring a gun to another person who the seller knows or has reason to believe is prohibited from receiving or possessing it.

The NRA has been actively involved in supporting efforts to ensure that where background checks are required under current law, the information on which they are based is complete, accurate, and up-to-date. Yet as we have reported, the Obama Justice Department seems to have little interest in enforcing the laws already on the books.

In the future, we suggest that Mayor Bloomberg spend a few more of his many, many dollars checking his facts before unleashing his political attacks. He certainly can afford it. We would also caution voters to be aware that while background checks have their place in dealer sales, they are not a cure-all for evil, a point Bloomberg's ad ironically makes all too well.

The masks are now all the way off.