JUST ONE CALAMITY AMONG MILLIONS: Obamacare Throws Pregnant Woman Off Her Policy, Leaves Her Uninsured

Step back for a moment and consider the hubris required to believe that a single law -- tens of thousands of pages of regulations -- could replace all of the decisions made regarding one-sixth of the economy... and could do so without harming millions of individuals.

With that as a backdrop, please consider just one of those millions of horror stories. 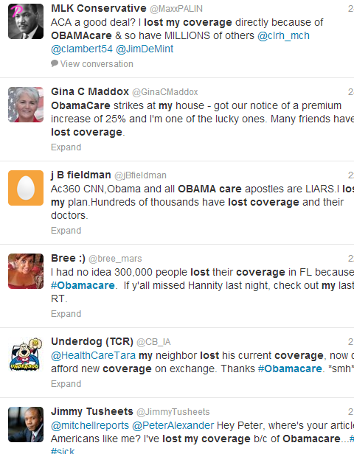 Fullerton resident Jennifer Harris thought she had a great deal, paying $98 a month for an individual plan through Health Net Inc. She got a rude surprise this month when the company said it would cancel her policy at the end of this year. Her current plan does not conform with the new federal rules, which require more generous levels of coverage.

Now Harris, a self-employed lawyer, must shop for replacement insurance. The cheapest plan she has found will cost her $238 a month. She and her husband don’t qualify for federal premium subsidies because they earn too much money, about $80,000 a year combined.

“It doesn’t seem right to make the middle class pay so much more in order to give health insurance to everybody else,” said Harris, who is three months pregnant. “This increase is simply not affordable.”

The Harris family is but one household among millions who have lost coverage, lost hours at work, or have lost their jobs altogether. A quick search on Twitter confirms the inconvenient truth.

In short, Obamacare's website is the very least of its problems.

"If Democrats had any conscience, they would be ashamed of themselves, but they’re Democrats .." http://t.co/nc1YQ65K9p

Obamacare is the best thing that could befall America.

Your looking at one of but millions of American's who will finally be enlightened to the tyranny that began with the Fabian's, the ponzi scheme known as the "federal reserve and ratification of the 16th Amendment.
We as productive people have been bled white of our last buck by the shakedown artists running this Republic. There is not enough of our wealth remaining for this 21st century vandal horde to satisfy their hubris and insatiable greed.

No, they only money they could get there filthy fetid meat hooks on was the money we managed to preserve from these fucking thieves in that cesspool on the Potomac, our hard earned bread we use for our essentials in our lives like our health.

This abortion of statist extortion the detroitocrats foisted on us will do more for the cause of Liberty since the original Tea Party, Patrick Henry's speech, and Lexington combined.

When these folks figure out they have been played for histories biggest suckers, that 2 bit dicktater in the oval office ain't gonna have enough boolits for the payback he and his mandarin con artists have so richly deserved.

Shove their treason and tyranny up their illegitimate hi and mighty arses.
Lets see how they care for a full serving of the shit sandwich they been trying to cram down our throats.