A new book on the 2012 presidential campaign by Mark Halperin and John Heilemann will be released on Tuesday. In an excerpt published in Time, Romney strongly considered Chris Christie as a potential running mate. That is until the Romney team unearthed the New Jersey governor's questionable background.

In the nine months since Christie’s endorsement of Romney in October 2011, Boston had formed a mixed view of the governor who George W. Bush had once nicknamed Big Boy. Christopher James Christie, 51, was less than two years into his first term as governor of New Jersey, suave as sand­paper and morbidly obese. He was also one of the most intriguing figures in American politics. His voice was like an air horn, cutting through the clutter. There was no one better at making the referendum case against Obama, at nailing the President to the wall with ferocity and caustic humor. Christie’s temperament was ideally suited to the unfolding tenor of the race. “We’re in a street fight, and he’s a street fighter,” Romney’s chief strategist Stuart Stevens told Romney. “He’s the best street fighter—and he’s comfortable saying things that you’re not comfortable saying.”

He was also a fundraising dynamo, but he and his staff were overbearing and hard to work with, demanding in ways that would have been unthinkable from any other surrogate. Months earlier, Christie had banned Romney from raising money in New Jersey until Christie had given the O.K. to do so—a move Romney found galling, like something out of The Sopranos. Are you kidding me, Mitt thought. He’s going to do that? There were plenty of New Jersey donors who’d given money to Mitt in 2008; now Christie was trying to impose a gag order on talking to them? “He sounds like the biggest asshole in the world,” Stevens griped to his partner, Russ Shriefer. More recently, Trenton insisted on private jets, lavish spreads of food, space for a massive entourage. Romney ally Wayne Berman looked at the bubble around Christie and thought, He’s not the President of the United States, you know.

Chronically behind schedule, Christie made a habit of showing up late to Romney fundraising events. In May he was so tardy to a donor reception at the Grand Hyatt New York that Mitt wound up taking the stage to speak before Christie arrived. When the Jersey governor finally made his grand entrance, it was as if Mitt had been his warm-up act...

...The list of questions Myers and her team had for Christie was extensive and troubling. More than once, Myers reported back that Trenton’s response was, in effect, Why do we need to give you that piece of information? Myers told her team, We have to assume if they’re not answering, it’s because the answer is bad.

The vetters were stunned by the garish controversies lurking in the shadows of his record. There was a 2010 Department of Justice inspector general’s investigation of Christie’s spending patterns in his job prior to the governorship, which criticized him for being “the U.S. attorney who most often exceeded the government [travel expense] rate without adequate justification” and for offering “insufficient, inaccurate, or no justification” for stays at swank hotels like the Four Seasons. There was the fact that Christie worked as a lobbyist on behalf of the Securities Industry Association at a time when Bernie Madoff was a senior SIA official—and sought an exemption from New Jersey’s Consumer Fraud Act...

...There was Christie’s decision to steer hefty government contracts to donors and political allies like former Attorney General John Ashcroft, which sparked a congressional hearing. There was a defamation lawsuit brought against Christie arising out of his successful 1994 run to oust an incumbent in a local Garden State race. Then there was Todd Christie, the Governor’s brother, who in 2008 agreed to a settlement of civil charges by the Securities and Exchange Commission in which he acknowledged making “hundreds of trades in which customers had been systematically overcharged.” (Todd also oversaw a family foundation whose activities and purpose raised eyebrows among the vetters.) And all that was on top of a litany of glaring matters that sparked concern on Myers’ team: Christie’s other lobbying clients, his investments overseas, the YouTube clips that helped make him a star but might call into doubt his presidential temperament, and the status of his health. 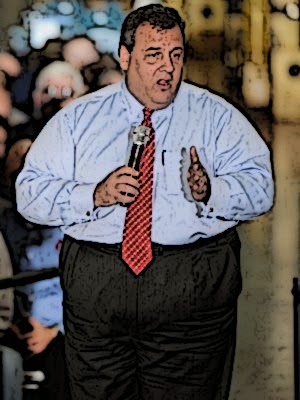 Ted Newton, managing Project Goldfish under Myers, had come into the vet liking Christie for his brashness and straight talk. Now, surveying the sum and substance of what the team was finding, Newton told his colleagues, If Christie had been in the nomination fight against us, we would have destroyed him—he wouldn’t be able to run for governor again. When you look below the surface, Newton said, it’s not pretty...

Then there was this: “In response to the questionnaire, Governor Christie indicates that he has no health issues that would hinder him from serving as the vice-presidential nominee. Published reports indicate that Christie suffers from asthma and was briefly hospitalized last year after he suffered an asthma attack. He is also obese and has indicated that he struggles with his weight. ‘The weight exacerbates everything,’ he is quoted as saying. Christie has been asked to provide a detailed medical report. Christie has been asked to provide a copy of all medical records from his most recent physical examination. If Christie’s possible selection is to move forward, this item should be obtained.”

Despite the language in the report indicating that Christie had not been sufficiently forthcoming with his medical records, Romney and Myers agreed that what he had provided put their minds at ease about his health. But the dossier on the Garden State governor’s background was littered with potential land mines. Between that and the pay-to play snag, there was no point in thinking about Christie further. With the clock running out, Romney pulled the plug again, this time for good...

File this story away for the run up to 2016 where the Karl Rove-led consultant class will tell us that Christie's the only one who can win. Just like they told us McCain and Romney were the only ones who could win.

at 10:27 AM
Email ThisBlogThis!Share to TwitterShare to FacebookShare to Pinterest
Labels: Christie, Democrats, MSM, Obama

And Ann Coulter thought Christie was the only one who could win. No point in ever listening to her, or Rove, or many of the "conservative" pundits paraded on Fox ever again. Who should we trust???

Skeletons in the closet? Meh.

If we required every political candidate to be free of such "skeletons" then no one would be eligible to run.

The trick is to select candidates that claim to represent the values which will keep our Nation strong, successful, and ongoing... and then once they are elected hold them to their promise(s).