America's heroine Pamela Geller points us to an exceptional summary of diplomat Michael Oren's new book. The former Israeli Ambassador to the United States -- no right-winger to be sure -- has outlined a stunning insider's look at Obama's assassination of the relationship between the two longtime allies. Adam Kredo, writing at Washington Free Beacon, outlines some of the most outrageous revelations.

“Prophecy was not required to foresee that an Obama presidency might strain the U.S.-Israel alliance,” Oren writes in the early pages of his book... Obama stacked his administration with senior officials hostile to Israel and pursued a policy of “daylight” with Jewish state, Oren recounts... “The first thing Obama will do in office is pick a fight with Israel,” Oren recalls a confidant as telling him in the early days of the administration.

Below are a series of passages that reveal in detail how the U.S.-Israel alliance hit historic lows under the Obama administration. 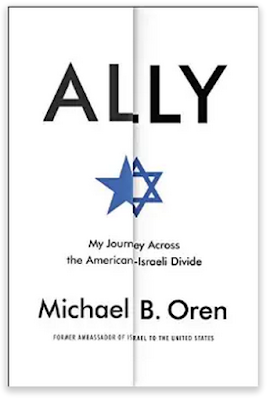 1. ‘I know how to deal with people who oppose me’

The tension between Obama and Prime Minister Benjamin Netanyahu of Israel began during their first meeting at the White House, Oren recalls. While the meeting appeared to go “smoothly,” behind the scenes Obama outwardly threatened Netanyahu.

“Face-to-face, I later heard, Obama had demanded that Netanyahu cease all building not only in the territories but also in the disputed areas of Jerusalem,” Oren writes. “‘Not a single brick,’” the president purportedly said. ‘I know how to deal with people who oppose me.’”

Oren recounts listening to Obama’s 2009 speech in Cairo while stationed in the IDF’s headquarters. “Their reactions typified that of a great many Israelis.”

These commanders “scoffed at what they regarded as Obama’s inexperience with the Middle East, where magnanimity is often seen as weakness. They cringed at his tendency to equate America’s moral foibles with the honor killings, human trafficking, and the suppression of women, foreign workers, and indigenous minorities rampant in many Muslim countries,” Oren writes.

Their opinions only grew dimmer when Obama “linked that legitimacy [of Israel] to the Jews’ ‘tragic history’ in the Holocaust. That linkage seemed to me to be the most damaging part of his speech.”

Oren’s first meeting with then-Deputy Secretary of State Jim Steinberg was fraught and filled with demands that Israel consent to Obama administration demands for a total building freeze in Jerusalem. Such intimidation and threats would be a cornerstone of Oren’s meetings with senior officials at Foggy Bottom.

“Under the administration’s policy, a Jew could only build his home in certain Jerusalem neighborhoods but an Arab could build anywhere—even illegally—without limit. ‘In America,’ I said, ‘that’s called discrimination.’”

Later in his tenure, Steinberg would again upbraid Oren. State Department staffers apparently “listened in on” the angry meeting and “cheered,” according to Oren.

A handful of congressional Democrats berated Oren during his first trip to Capitol Hill as ambassador.

“In our first conversation, Sen. Bill Nelson of Florida caught me off guard with a letter from a constituent alleging ‘Israeli economic apartheid’ in the territories,” Oren recalls.

Later, “Senator Dianne Feinstein offered me a glass of select California wine and said, ‘I am a peacemaker but you are a fighter.’”

Later in the book, Oren recalls taking a call from Sen. Barbara Boxer (D., Calif.), who “railed at me so furiously [about Israeli criticism of Obama] that I literally had to hold the phone form my ear.”

Obama’s first meeting with a delegation of top American Jewish leaders was tense, according to Oren.

While such gatherings “had become standard” for previous White Houses, “for Obama … the briefings were less a means of garnering support than of muting opposition. Indeed, what many American Jewish leaders saw as the placing of undue pressure on Israel, the president regarded as displays of restraint.”

“I don’t like this f***ing shit,” Oren quotes Emanuel as saying about Israel’s refusal to stop building Jewish homes in disputed territories.

“Rahm, I knew, was not enamored of my boss or of the American Jewish leaders whom he faulted for backing Netanyahu unconditionally,” Oren writes.

Later in the book, Oren recalls Emanuel referring to a settlement dispute between Israel and the U.S. as “a pimple on the ass of the U.S.-Israel friendship.”

Oren, who refused to participate in the event, reveals that Obama administration officials had direct orders to criticize Israel publicly.

Hannah Rosenthal, the administration’s former adviser on anti-Semitism, “issued her first denunciation not of anti-Semites, but rather of me for boycotting the summit,” Oren writes.

“Hannah eventually became a friend and I never took her comment personally,” he adds. “Nor did I believe that she acted on her own, since I later learned that some of the criticism emanated directly from the White House.”

Oren reveals that in the early days of his tenure, then-Secretary of State Hillary Clinton refused to meet with him in person.

“I reached out to Hillary Clinton, asking for a private meeting, only to be rebuffed,” Oren recalls.

When Secretary of State Hillary Clinton learned of Israeli plans to transform a slum in Jerusalem into a ritzy tourist mall, “she nearly blew her top,” according to Oren.

The slum was deemed controversial due to its location in an East Jerusalem neighborhood the administration considered as disputed.

“We practically had to scrape her off the ceiling,” according to a senior American official who spoke to Oren.

When U.S.-Israel tensions hit a high point in 2010, Oren frantically sought to diffuse the hostility by setting up a meeting with then-Senior White House Adviser David Axelrod.

“I urged him to find a way out of a situation that I feared might become dangerous for Israel, but Axelrod calmly brushed this aside,” Oren recalls. “Instead, he accused me of urging congressmen to hold on until [the] 2012 [elections], that Obama would never get reelected. That charge of interfering in internal American politics could have rendered me persona non grata and resulted in my expulsion from the United States.”

After working furiously to secure a deal with U.S. officials for 20 F-35 Joint Strike Fighters, Obama cancelled the arms sale, according to Oren.

“The impact, for Israel, was calamitous,” Oren writes. “Editorials—apparently fanned by official sources—suggested that the F-35s has been an Israeli demand, rather than an American offer.”

12. Robert Gates Has A ‘Visceral Dislike of Netanyahu’

U.S. and Israeli leaders saw the sale as an affront to the Jewish State’s Qualitative Military Edge (QME), a longstanding deal in which the United States has assured Israel’s military supremacy in the region.

“Such concerns [about maintaining the QME] unnerved Netanyahu in a July 6 meeting with [former Secretary of Defense] Robert Gates,” who had “long harbored a visceral dislike of Netanyahu,” according to Oren.

“The animus” between Netanyahu and Gates “was discernible in the Blair House reception room, where Netanyahu promptly took Gates to task for the Saudi sale.”

13. White House Orders Israel to Hold Off On Iran Strike

As the Iranian march for nuclear weapons hit a critical point in the summer of 2009, the Obama administration publicly affirmed Israel’s right to defend itself.

Behind the scenes, though, the White House ordered Israel to lay off Tehran.

“Off camera … the message was ‘Don’t you dare,’” Oren recalls. “Washington quietly quashed any military option for Israel.”

14. Obama Destroys ‘More Than 40 Years of American Policy’ Toward Israel

On the eve of a critical vote at the United Nations on a Palestinian-backed resolution to condemn Israeli settlements, Obama held a 50-minute phone call with President Mahmoud Abbas of the Palestinian Authority .

Obama, during that call, promised to “renew America’s demand for a total freeze on Israeli construction in the West Bank and East Jerusalem.” He also promised to lend his support “for a Palestinian state based on the 1967 lines,” an unprecedented call from a U.S. president, Oren writes.

“The Prime Minster’s Office had learned of Obama’s offer to Abbas from U.N. sources, not the United States, and was outraged,” Oren recounts. “The White House has overnight altered more than forty years of American policy” and “Israel felt abandoned.”

Following the White House’s move to leave Israel in the dark on the U.N. vote, Oren met with then-U.N. Ambassador Susan Rice.

Rice sat in her New York office “brooding and peevishly tapping her forehead with her finger,” according to Oren.

“Israel must freeze all settlement activity,” Oren recalls her saying. “Otherwise the United States will not be able to protect Israel from Palestinian actions at the U.N.”

“’If you don’t appreciate the fact that we defend you night and day, tell us,’ Rice fumed, practically rapping her forehead. ‘We have other important things to do.’”

16. ‘The President is Going to Take On the Prime Minister’

Ahead of the American Israel Public Affairs Committee’s (AIPAC) annual conference in Washington, a senior U.S. official told Oren that Obama was out to “take on” Netanyahu directly.

Both leaders were scheduled to give talks at the pro-Israel lobbying group’s annual confab.

“The president is going to take on the prime minster in front of AIPAC,” former White House Chief Of Staff Bill Daley told Oren. “And if he gets booed, so what?”

Writing in the New York Times after Netanyahu’s address to AIPAC, columnist Tom Friedman asked if “Netanyahu understands that the standing ovation he got in Congress was bought and paid for by the Israel lobby.”

“I called Tom the moment the article came online and urged him to retract it,” Oren recalls. “You’ve confirmed the worst anti-Semitic stereotype, that Jews purchase seats in Congress,” Oren informed him.

Friedman’s response: “For every call I’ve received protesting, I’ve gotten ten congratulating me for finally telling the truth. … Many of those calls were from senior administration officials.”

Disagreements between the United States and Israel reached another boiling point when the Palestinian Authority moved to gain unilateral recognition at the U.N.

Congressional law mandated that such a move should result in the closure of the Palestinian Liberation Organization’s Washington office, the cut off of U.S. aid to the PA, and the termination of all U.S. funding to any U.N. organization that recognized Palestine.

While pushing Israel’s cause at the State Department, Oren was chastised by Deputy Secretary Tom Nides.

During a meeting at the White House with Israeli leaders, Obama allegedly expressed great support and faith in Turkish leader Recep Tayyip Erdoğan, a notorious critic of Israel who has promoted anti-Semitic conspiracy theories.

“He’s not living in the sixteenth century,” Obama told the Israelis present in the meeting, according to Oren. “We could do much worse than have a bunch of Erdogans in the Middle East.”

When the United States first decided to launch airstrikes against Syria, Israel was left in the dark, another first in the U.S.-Israel relationship, according to Oren.

The ambassador learned about the strikes while listening to the radio.

“The razor froze in mid-shave,” he writes. “Wiping the foam from my face, I rushed to the embassy. The once-sacred principle of ‘no surprises’ in the U.S.-Israel alliance had fallen into desuetude during the Obama period, but never to this depth on an issue so vital to our immediate security.”

21. Obama Only Backs Israel ‘Because That’s What the American People Want’

During yet another meeting between Obama and Netanyahu, the president attempted to reassure Israel that it would defend it in any war with Iran.

Obama revealed that he only backs Israel because a plurality of Americans demands it.

“If war comes, we’re with you, because that’s what the American people want,” Oren recalls Obama saying.

Spiritual warfare via human proxies, pure and simple. Israel is the only nation in the Bible that has its own guardian angel. Daniel 12:1 The Jews are not perfect and nothing says we have to cater to anything they want to do, but I would not put their national existence at risk, which is exactly what BHO is doing.

Obama will get his due in time. Lets see him take on God.