Chief Justice John Roberts today joined Anthony Kennedy and all the Supreme Court Democrats in upholding Obama’s unconstitutional, deceptive, and indescribably destructive healthcare law. Today’s decision in King v. Burwell declares that even though the Affordable Care Act (Obamacare) specifically required individuals to enroll through state exchanges to obtain subsidies, enrolling directly through the federal government is essentially the same thing. This decision once again displays the Supreme Court’s willingness to ignore the clear intent of law in order to achieve a politically desired result. For Roberts it has written into stone an unmistakable pattern. 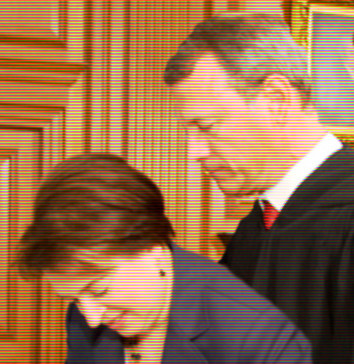 ‘Because the Constitution permits such a tax, it is not our role to forbid it, or to pass upon its wisdom or fairness,’ wrote Roberts, deploying the tactical disingenuousness such people always display whenever they ratify a federal power grab. This feigned humility was used to cloak an unambiguous lie: The measure Roberts describes is a direct un-apportioned tax, which, as we’ve seen, is explicitly forbidden by the Constitution.

His next was almost certainly throwing in with the Court’s leftists on gay rights – ignoring the clear state’s rights issue involved by voting not to hear five cases that defended traditional marriage as a state’s right. “Almost certainly” because a decision to hear the cases required only four in agreement and votes are taken in secret. Scalia, Thomas and Alito were likely willing to hear the cases. Where was the fourth vote?

Now Roberts has done all possible to seal this country’s fate by once again siding with Obama. In today’s decision, dissenting Justice Antonin Scalia wrote of its mind-numbing idiocy (see pp. 27 – 29):

Kennedy is usually considered the swing vote, but would have been hard put to defy Roberts. The chief justice’s siding with the Left gave Kennedy free rein to exercise his naturally squishy tendencies. Roberts will almost certainly side again with the homosexual rights activists against the Constitution’s First Amendment protecting freedom of religion. As described earlier, the upcoming gay rights decision is not about gay rights at all. If successful it will declare the rights of one pressure group, homosexuals, superior to the First Amendment to the U.S. Constitution – a decision that will render the Constitution essentially irrelevant. Make no mistake: this has been the Left’s target all along, and the destruction of our Constitution will spell danger for all Americans, including gays. Liberal idiots, however, never get it.

The only remaining question is whether Roberts was a stealth appointment, i.e. a pretend conservative who revealed his true colors when it really counted, or if he was somehow compromised by this evil administration. The truth will likely never be known but is probably irrelevant anyway, as this man has repeatedly and unmistakably signaled his determination to betray those who appointed him, his political party and his country.

What a national disgrace.

All the more reason for a mandatory retirement age for these "political" appointees. These are not "wisemen", they are not "honorable, trustworthy, incorruptible," they are men/women who are subject to their own devices and forget whom they are "supposed" to serve.

Lifelong appointments are so archaic! We need to start a revolt. That is sooo yesterday.