SO, JASON CHAFFETZ: Exactly Who is Going to Prison?

FNC's Chad Pergram reports, via Gretawire, that multiple crimes were committed by the IRS in its systemic efforts to cover up targeting of political opponents. 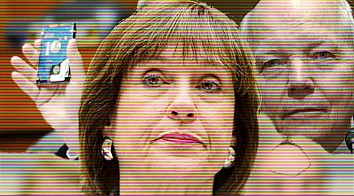 Fox is told the hearing will definitively state there was a destruction of evidence 10 months after a preservation order for the emails was in place, 7 months after a subpoena was in place and 30 days AFTER the IRS realized there were potential problems locating the emails. This destruction of evidence happened 22 days BEFORE the IRS Commissioner testified to Congress, in response to my questioning on March 26, 2015, that they had the documents and they would provide all of them to Congress.

In June they informed the Senate they were missing.

Further, the IG is expected to conclusively testify 5 of the 6 potential places where the emails might have been stored were never looked at by the IRS, despite the preservation order, congressional testimony, subpoena, etc.

House Republicans investigating the IRS’s targeting of tea-party groups are seriously considering an effort to impeach IRS commissioner John Koskinen or other agency employees for “culpable misdemeanors” pertaining to the destruction of e-mails written by Lois Lerner, the former official at the heart of the scandal...

...Lawmakers have been privately mulling the unconventional tactic for months, in part due to frustration that cutting the agency’s budget and holding Lerner in contempt of Congress failed to speed up the glacial pace at which the agency has produced documents requested by the committee. The ultimate decision depends on their ability to demonstrate that the IRS has obstructed the investigation — a public case that might begin Thursday, when the Treasury Department’s inspector general announces that IRS officials destroyed the files “most likely to have contained Lerner’s emails” after telling Congress they could not be found, according to a transcript of the IG’s forthcoming testimony to the Oversight Committee obtained by NR...

...According to inspector general J. Russell George, IRS officials literally put Lerner’s hard drive through a shredder, destroying it without exhausting every means of attempting to recover her data. “IRS IT management determined the extra effort to recover data from Ms. Lerner’s hard drive was not worth the expense,” George says in his prepared testimony...

...George goes on to note that IRS employees also erased the backup tapes of the server that housed Lerner’s e-mails in 2010 and 2011, though he says he “did not uncover evidence” of any conspiracy to obstruct the investigation. “[Investigators] took possession of the 424 backup tapes and determined that 422 of the 424 tapes were degaussed (i.e., magnetically erased) by IRS employees in Martinsburg on or around March 4, 2014, one month after the IRS realized they were missing e-mails from Lois Lerner, and approximately eight months after the House Committee on Oversight and Government Reform requested ‘all documents and communications sent by, received by, or copied to Lois Lerner,’” George says in his prepared testimony.

Three weeks after the backup tapes were destroyed, Koskinen — Obama’s appointee to lead the IRS in the wake of Lerner’s public apology for the targeting of conservatives — practically dared House Republicans to take action against him when Representative Mark Meadows (R., N.C.) asked him how long Congress should wait for documents before holding IRS officials in contempt.

“I think the timeline is whenever you think you could actually sustain that in a court,” Koskinen said during a hearing in March of 2014 ... In light of Koskinen’s public defiance and the agency’s continued stonewalling of the investigation, some lawmakers favor impeachment, because it doesn’t require cooperation from President Obama’s Justice Department. “Any civil officer is liable to be impeached,” the lawmaker says. “If the IG reports that evidence has been destroyed deliberately, that would be clearly a misdemeanor.”

“It’s really a test of whether Congress is going to defend its institutional prerogatives,” the Oversight Committee member says. “If you have a situation where it’s fine for people to come misrepresent the facts, not produce documents, and just do that with impunity, then why are we even conducting oversight?”

I'm sure Koskinen and Obama are quaking in their Ballys.

Republicans are going to consider impeachment. Just like they considered repealing Obamacare or stopping Obamatrade.

I'll believe it when I see it. Until then, it's just more Failure Theater™.