TRAVESTY: DOJ Brings Charges Against Soccer Federation FIFA But Not the Clintons

It was not much of a surprise to some to see the U.S. Department of Justice (DOJ) bring corruption charges against the Fédération Internationale de Football Association (FIFA) this week. After all, the granting of World Cup hosting rights to Russia (2018) and Qatar (2022), appeared highly suspect, along with several other apparent “pay to play” coincidences. Considering the nature of the charges against FIFA, it seems only logical to wonder if, or when, such charges will be levied against Bill and Hillary Clinton, and the Clinton Foundation. 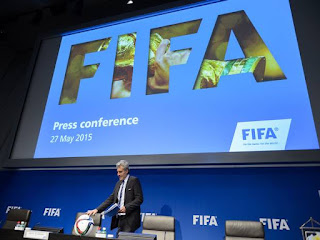 The DOJ indictment alleges that FIFA officials “abused their positions of trust to acquire millions of dollars in bribes and kickbacks,” according to Attorney General Loretta Lynch. The graft is alleged to have influenced World Cup host nation selection, marketing rights for sports marketing companies, and broadcast rights for television coverage of FIFA events.

Prima facie, it doesn’t appear that FIFA did anything more legally dubious than did the Clinton Foundation. According to Hillary Clinton last year, the First Family of the 1990’s left the White House “dead broke,” in 2001. They made up for their White House poverty years from 2001-2006, when, according to Mrs. Clinton’s Senate disclosures, the couple made $87.3 million, from book deals to speaking fees. As long as none of those paydays bought influence, that’s just fine, unless of course one’s ideology requires disdain and class-envy of those who are financially successful, for the Clintons are clearly “one per centers.”

The Clinton’s financial waters become much more murky when their Foundation is brought into the picture. The Clinton Foundation is classified under IRS Code 501(c)(3) as a “non-profit” foundation, comprising several separate “initiatives,” or areas of focus, including health, economic opportunity, and climate issues. In just over 13 years, the Foundation has raised nearly $2 billion from U.S. corporations, especially Wall Street firms, political donors, and foreign governments.

The nebulous financial arrangement and political nature of the Foundation was of sufficient concern to the Obama administration that Mrs. Clinton was required to sign a disclosure agreement with the White House before her nomination as Secretary of State in 2009. According to the Washington Post, Obama required her “to disclose all contributions to the Clinton Foundation, and that there be a process to vet donations that were coming in. They violated that agreement almost immediately. They took multi-million dollar donations from foreign businesses that had interests before the State Department. Those were never disclosed.”

But even that raises significant issues, since according to the Foundation’s own tax filings, only 10% of their donations ultimately make it to “charitable grants” for their professed causes. That’s a whole lot of donations that go for expenses (34%), salaries and benefits (33%), travel (10%), office supplies (6%), and rent (5%). And don’t forget the 2% that goes to IT (information technology), for that’s where all of Hillary’s emails were stored, in two separate email accounts, until they were erased.

That’s likely where much of the hard evidence alleged in Peter Schweitzer’s book, “Clinton Cash,” would have been found. Absent the hard evidence, most of the public evidence is circumstantial. Charges that official State Department policy toward countries like Libya, Saudi Arabia, and India, were altered or softened after contributions by those countries to the Foundation certainly raise serious questions of paying for influence, not unlike those leveled against FIFA officials this week.

The most serious, however, is well documented. As explained by the New York Times, a Canadian businessman was purchasing up to 1/5 of the U.S. uranium assets, while making millions of dollars in contributions to the Clinton Foundation. The Canadian firm, Uranium One, was then sold to Russia’s atomic energy agency, Rosatom, which was celebrated in Russia’s Pravda with the headline, “Russian Nuclear Energy Conquers the World.” An acquisition of this size and nature had to be approved by the U.S. State Department, which was easily done with Mrs. Clinton at the helm.

To make this even more salacious, a Kremlin-linked bank that was promoting the stock of Uranium One, paid Bill Clinton $500,000 for a speaking engagement. But the contribution went not to the former president, but to the Clinton Foundation, as many of the speaking fees are funneled for non-taxable reporting purposes.

The Clinton Foundation meets all of the criteria for a money-laundering entity: placement, layering, and integration, while enjoying the benefit of tax-exemption. They collect millions in donations (placement). Then through layering (or structuring) distance is created between the donation and the source, to obscure the audit trail. And finally the integration stage, which in the Foundation’s case, is the returning of favors and influence to donors.

Operationally, the Clinton Foundation functions as a shell corporation for the Clintons, and the pass-through conduit for buying influence and tax avoidance. Thanks to the IT staff at the Foundation, and Hillary’s obfuscation, we may never fully grasp the breadth and reach of the corruption. No wonder only 38% of us believe Hillary is honest.

If FIFA bribery and corruption is worth investigating, certainly the similar practices of the Clinton Foundation are as well. After all, the implications are much greater.

Loretta Lynch is Obama's tool.
Going after FIFA is a candy-a$$ed way to try to prove the USA is still the world's policeman.