Joshua Riddle spots a doozy of a rebuke to the Supreme Court on, of all places, Facebook:

This was a great response on Facebook right after the Supreme Court ruled that gay marriage is now legal in all 50 states. 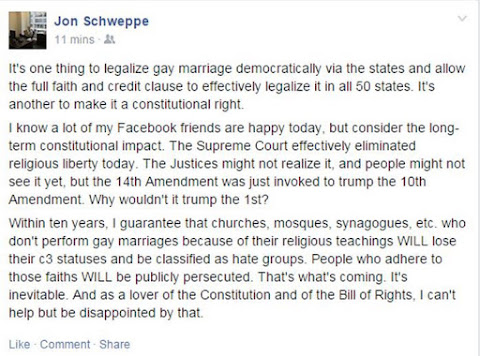 Roberts zeroes in on where the next big game is. You & I both know this is coming. pic.twitter.com/aCJBzBWdEO

The gay marriage “gotcha” question for Republican debates will now become “Would you attend a church that performs a legal gay marriage?"

Within a few years tax exempt status will be stripped from churches. Charitable giving will dip. More govt will move in to fill in the gap.

It appears that one of the few peaceful options left is for the States to call an Article V convention to amend the Constitution. But how do we add new words when judges are clearly no longer held to rule based on the meaning of words?

My only solution at this time is to change lifetime tenure of the federal judiciary to require them to stand for "retention" every other presidential election cycle. At least then we can eject judges that "go Roberts".

But even this is no enough to repair the mess we find ourselves in. Maybe we ought to also have a Nullification provisions so a majority of the States can nullify a given Supreme Court ruling.

If the Convention only tried to get a fresh reset, I am certain that the new Constitution would be destroyed fairly quickly if only because history provides the guidebook on how the one we currently have was destroyed.

Thank you, Doug. Your kindness especially shines forth on this gray day for Freedom and Ordered Liberty.

And the worst moment of this awful day came when I told my 17-year-old son the news, and he wasn't even shocked. "We knew this was going to happen," he said. "It's not like we didn't already know the country's going to hell." Only 17, and he's already given up hope for this country. Meanwhile, my 21-year-old has been saying for several years that he thinks civil war is coming. Having studied the Civil War intensively, and knowing that any future civil war would be even worse than the last one (orders of magnitude worse), I always lay into him when he says stuff like that. But today, for the first time, I really do fear he's right.

That the Facebook poster is merely "disappointed" is EXACTLY WHY this has happened. From 'it doesn't affect me' to abjectly unaware, we have gotten the government we deserve.

As Rush said on Friday, there is conservative anger, and that's it. No pushback. No effort to stop what progressives are doing. Hell, there isn't even a plan.

Can a game of catch-up be played at this late stage? Possibly. Will we get the same incoherent purity tests on every GOP hopeful? You betcha.

When your house is burning down is NOT the time to be choosey about which hose to use. Starve the monster. The State to which you were in allegiance is gone. They've thrown away the rule book, but only as it applies to Them. The Us must play hardball.

If you cannot, and your candidate is not already clear, there really is
no hope.