What the Obama worshippers missed

It is not surprising that former Israeli Ambassador to the U.S. Michael Oren is now in the sights of the Obama Defenders Corps, a collection of U.S. administration officials, sycophantic journalists and other obsessive critics of Israel. 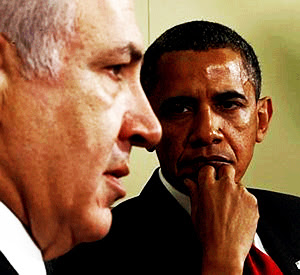 The former ambassador has revealed in his new book what most Israelis and many Americans now know to be true: that U.S. President Barack Obama abandoned Israel ever since the beginning of his term in 2009, and that the breach in U.S.-Israel relations is primarily his doing. In fact it was a deliberate policy to create distance between the United States and Israel, since the president was far more interested in making nice to the likes of Iran and the Muslim Brotherhood, and the Muslim world in general. Close U.S. ties with Israel presented an obstacle in Obama's path toward accomplishing these other goals.

In essence, Obama had swallowed the message of Professors Steven Walt and John Mearsheimer in their book: "The Israel Lobby" in its entirety. Obama was also educated in Third World/academic perspectives on international conflicts, which always tend to favor the weaker or non-Western party. So it was predictable that he would come into office believing Israel was primarily at fault in its conflict with the Palestinians, and so pressure needed to be applied to them.

None of this should have been a surprise to anyone who honestly explored Obama's history before he became president. That of course excludes the likes of New Yorker editor David Remnick who managed to miss all the essentials despite a multi-pound tome that later filled many remainder shelves. Why would Obama and his family have remained in the church of anti-Semitic, America-bashing Rev. Jeremiah Wright for so many years? What exactly were the connections between Obama and Ali Abunimah, the co-founder of the Electronic Intifada website, or between Obama and Professors Rashid Khalidi and Edward Said? How much of Obama's autobiography did he write himself and how much was it the work of far more than "casual acquaintance on the street" Bill Ayers, the former domestic terrorist? When Obama declared that his presidency would be transformative, he meant it.

Oren's new book, "Ally: My Journey Across the American-Israeli Divide" will be formally released on June 23. Oren has already written columns for major American papers on the book, including The Wall Street Journal and the Los Angeles Times, and he has been interviewed by other journalists.

The book is causing severe heartburn in the White House for any number of reasons. The timing of the book's publication is a particular problem for the White House. As the complete capitulation to Iran on virtually every contentious issue in the negotiations becomes clearer each day, and with a June 30 deadline for a deal approaching, Oren's book may cause even more skepticism among the growing number of critics of the deal, potentially even among some Democrats in Congress, who are among those who still care about Israel's survival.

Oren's Los Angeles Times column attacks the president for arguing that Iran can be anti-Semitic and still behave rationally in regard to its nuclear program. As a historian, Oren is aware that as Nazi Germany was losing World War II, it became even more committed to killing off every Jew it could in Europe. Was this rational?

The president has recently launched a brief campaign to warm the hearts of his liberal Jewish supporters and ease their minds about the Iran deal. He had one more conversation with Jeffrey Goldberg (the semi-official Obama-Jewish translator), and spoke at a synagogue in Washington whose members include prominent officials and journalists, almost all of whom likely voted for him, and always vote for Democrats. These are the Jews Obama knows, and the ones an editor of the Los Angeles Jewish Journal believes should say: "Thank you, Mr. President," or be considered "ingrates."

Oren is the worst person the White House could want to be on their case at this time. He is not an Israeli who speaks English poorly. He is not and never has been a "right-wing" member of the Likud or another nationalist party. He is not ultra-Orthodox. He does not live on a settlement. He is an American who made aliyah, as did his wife. Oren is also a noted historian and scholar, with three degrees from two Ivy League schools: Columbia and Princeton. His previous books on the 1967 Six-Day War and American involvement in the Middle East have won the National Jewish Book award and the Los Angeles Times History Book of the Year award. He has taught at Harvard, Yale and Georgetown, and for five years was a contributing editor to the liberal New Republic. He has been published in The New York Review of Books, and the left-of-center newspaper The Forward named Oren one of the five most influential Jewish Americans in the world. In short, Oren cannot be caricatured as a man of the Right, or someone who would automatically be expected to be among those bashing Obama for whatever reason. His new book still remains faithful to the need for a two-state solution. He is, in many ways, the poster boy for Jewish liberals -- well-educated at prestigious schools, articulate, a scholar and a moderate who is part of the consensus view on the conflict. More accurately, Oren was a dream Israeli, before he revealed that the emperor (America's "most Jewish president" in Obama's own modest view) had no clothes.

It is worth noting that Oren had reached so high a degree of respect and acceptability among liberal American Jews that Obama's selected Jewish interlocutor, Goldberg, had written a puff piece on Oren's wife Sally and her connection to rock musicians when she was growing up in San Francisco.

Given Oren's history, the attacks on him and his new book needed a different angle than the way the Left and the administration regularly go after Prime Minister Benjamin Netanyahu and his allies. The first chosen path was to attack Oren for his venality -- he is saying these things just to sell books. The administration naturally argued that Oren was not being honest. Any problems that exist were all Netanyahu's fault. U.S. Ambassador to Israel Dan Shapiro, a member of the Obama-loving synagogue in Washington, D.C. where the president recently spoke and was received so adoringly, demanded that Netanyahu and other Israeli political figures renounce the book and its history and conclusions. The head of the political party to which Oren now belongs, Moshe Kahlon, was also pressured to dissociate himself and his party (Kulanu) from the book, but he said no more than that the book was a personal memoir and written before Oren was a party member. This was clearly less than Shapiro was hoping for.

The demands made by Shapiro would be more expected to come from commissars in former East Germany than the United States, but control of the narrative matters to this White House. It has twisted itself into a pretzel trying to argue that the April 2 summary of terms with Iran was in fact still an accurate listing of the terms of the deal, when it is now apparent that the Iranian summary was far closer to the real agreement. Oren's condemnation of the Obama team for bearing the major responsibility for the now greatly weakened alliance between Israel and the United States makes the concessions to Iran and the seeming Captain Ahab-like pursuit of that deal appear even more irresponsible.

Oren's most telling comment on Obama in the new book was picked up by Joel Pollak:

"More alarming for me still were Obama's attitudes towards America. Vainly, I scoured 'Dreams from My Father' for some expression of reverence, even respect, for the country its author would someday lead. Instead, the book criticizes Americans for their capitalism and consumer culture, for despoiling their environment and maintaining antiquated power structures. Traveling abroad, they exhibited 'ignorance and arrogance' -- the very shortcomings the president's critics assigned to him."

Speaking to Breitbart News last week, Oren recalled his impressions of "Dreams." Obama said "nothing good about America" in his memoir, Oren says. Here was a man "without a word of praise or gratitude to America" -- and yet "no one was listening" to what Obama truly believed.

"That said a lot to me about where America was" when Obama was elected, Oren recalls.

This is the story that the Obama worshippers from 2008, including leadership from major American Jewish organizations, missed, or chose to ignore. If Obama felt this way about his own country, how could anyone take seriously the arguments of those who defended his pro-Israel bona fides with all the countervailing evidence that was available? Of course, if someone like Bill Ayers had a major role in writing "Dreams from My Father," the anti-American messaging should have been no surprise. Clearly, Obama was not uncomfortable with this message, whether he wrote it himself or approved what was composed by another.

There are too many important or self-important people who still pledge allegiance to Obama, or are steadfast supporters of his political party, for many minds to change as a result of Oren's book. But the former ambassador has done a public service revealing at this time, before the Iran deal is finalized or reviewed and voted on in Congress, the depth of the hostility toward Israel that now resides in the president, the White House, the State Department and among various other key officials and cabinet departments. This will be a tough one to sweep under the Persian rug. But fear not, the president has a message for you once he leaves the golf course and finishes up his fundraisers today: "Trust me and trust Iran, not Oren."