Guess what, Jeb Bush has officially announced his candidacy for President of the United States. 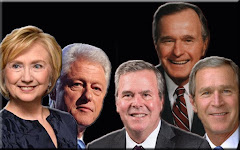 Now, to me, it looked like a joyless, heavily-staged, enthusiasm suite ritual, much like the baptism of the royal heir or some other pointless ceremonial drudgery. Now this, of course, is coming on the heels of Hillary Clinton's announcement, one of the 13 or 14 times that she's announced that she, too, is running for the top job.

Hillary's campaign has been something less than a snowy white dove released into an azure blue sky. It's been the kind of scandal-plagued disaster that makes one look at people running from the collapse of the flaming wreckage of the Hindenburg and mutter to themselves, those lucky bastards, under one's breath.

Now, both the Bush camp and the Clinton camp want to sell the American people on the idea of dynasty and they're both doing it in the same way emphasizing things like experience and leadership and connections.

But if the truth be told, and one of the major perks of coming from a great house is a facility for shading the truth, the real reason both of them are running is because that's what Bushes and Clintons do. They run for president.

You know, they have something else in common, these two, and that's the scathing contempt for the common person.

This is another reason to avoid dynasties like the plague. Both Jeb Bush and Hillary Clinton use expressions like, "my lifelong love of service", as if this was, in fact, actual service and not a continuation of the privileged and pampered lifestyles that they've both enjoyed for virtually their entire lives. You know, they've been using language like this to mask their love for power for so long, I bet they actually believe it.

Dynasties are deadly, and not just in American politics either. Just go to the example of Great Britain.

You know, when you limit supreme executive power to the wastrel sons of the House of York or the House House of Lancaster, you're excluding virtually all of the real talent and genius in any population. What's even worse is when the bloodshed stops because then the second generation layabout gives birth to the third generation libertine and then to the fourth generation sadistic psychopath because there's no curse worse than having a powerful, charismatic father or husband as the case may be.

Just look at our most recent experiment in American dynasties, the Kennedys. And John was a better man than Bobby. Bobby a far, far better man than Ted. You're still in the first generation. The second generation of Kennedys seem to be nothing but rape suspects and alcoholics. The third generation still trying to wring a few drops of juice from the Kennedy name are even less interesting people. So, who benefits from Bush versus Clinton version 2.0?

Well, the Bushes benefit, the Clintons benefit, but most importantly, the entire standing army of lifelong Washington insiders, the Cardinals in the robes, and the other lesser houses that have been in attendance inside the beltway since 1988 or 1992 or 2000, you know, ancient history, plus of course, legions of pollsters and advisers and campaign managers and all the rest.

The entire insider food chain is pulling for those two dinosaurs

You see, the entire insider food chain is pulling for those two dinosaurs and for the perfectly good reason that when you get right down to it.

In either case, they and their incomes would remain secure in opposition and, of course, the circle of life continues.

That's why we're being sold this Bush versus Clinton inevitability, and it's also why we already hear about what awesome candidates Chelsea Clinton would be or Michelle Obama would make as well. You see, there's a large dollar value attached to the status quo, and the people with the deep investment in it will do whatever they have to do to protect that investment.

I will tell you one thing about all of this. A Hillary Clinton win would be a catastrophe for this nation, a third act continuation of the stale, useless ideas that have brought us such economic stagnation at home and loss of prestige and power abroad.

A Bush III administration, on the other hand, won't do any of that, because Jeb Bush is not going to be the President, any questions?

The very idea that they seriously think the American people will vote for another President Bush in this day and age just shows me how out of touch with reality of 2015 they really are.

Look, I can't speak for the American people, I can only speak for this American person. I will, of course, never vote for Hillary Clinton. But I will not, under any circumstances, vote for Jeb Bush either, even if he is the Republican nominee. I'll go Libertarian or Constitution Party or something. I will not vote for him, because I'm a man of my word.

You know, in 2008, I asked my fellow conservatives to vote for John McCain despite the fact that he was the least conservative person in the field. We were told that a moderate was the only person who could win, conservatives stayed home, and that got us Obama I.

In 2012, I asked my fellow conservatives to vote for the only Republican candidate who, having invented the model for Obamacare, could not do what had been so successful back in 2010, in other words, running against Obamacare. We were told that a moderate was the only person that could win, conservatives stayed home, and that gave us Obama II.

I said in 2012 that if the GOP forced a moderate indistinguishable in virtually every way from the Democratic opponent, that if they tried it three times, I was out of here. I meant what I said. If we fall into this death by dynasty trap, that is, if we're pushed into it by corrupt and intellectually bankrupt lifers on both sides, then I am out of here. And I am not alone.

They are running because they know that it makes no difference which one of them wins - either will continue to further the leftist agenda for their big money donors, the Bilderbergs and Wall Street along with the Chamber of Commerce. These are the entities who are running the show. Bush and Killary will continue the New World Order agenda. Soros and his control of the democrat (communist) media will spare no amount of money to keep the leftist momentum going. Grass roots had better coalesce around ONE conservative candidate (Cruz) if they stand a snowball's chance in hell of beating the big money crowd.

Trump is the only voice of the American voter ...
In 2014 Republicans had a landslide win.. what did voters get from Republican Congress????????