This weekend, in defiance of the new law, supporters of the Second Amendment organized an arms expo in Yakima, WA. Participants are invited to sell or barter guns without any background checks. The event opened yesterday, and is continuing today.

Below is the statement made by Mike Vanderboegh yesterday at the opening of the event: 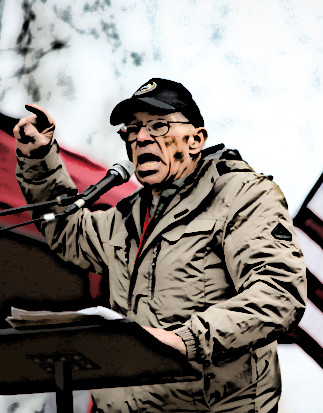 I’d like to speak to you about the uniqueness of what we are doing here today and the efforts we are making to deal with this unprecedented event and how it effects the way we’re handling the competing interests of the participants and the press. First of all, I’d like to thank y’all for coming and taking your courage in your own two hands and braving the uncertainties to be here. In looking out at you I see the Founders’ descendants, only the Founders didn’t have to deal with the modern surveillance state. There were no cameras at the Boston Tea Party, the Green Dragon Tavern where the Sons of Liberty met was not bugged by the secret political police of Ministry of Homeland Security, the Committees of Correspondence did not have their communications photographed by the Royal Mail, General Gage did not possess surveillance drones and Captain Parker was not plagued by agents provocateurs within his own ranks working for the King and determined to discredit the Patriot cause by goading them into firing first. It is fortunate for us that King George did not possess these instruments of tyranny. But the fact of the matter is that Barack Obama and his minions do possess them. So when you come here today, you are, I believe, exhibiting every bit as much courage as the Founders, for you do face these threats and still you refuse to comply. By your very presence here today, you are sending the message: WE WILL NOT COMPLY WITH THE INSTRUMENTS OF OUR OWN SLAVERY.

But how does this new reality impact us? You are here. The press is, or will be, here. But the fact of the matter is that there’s gonna be some good old fashioned Sons of Liberty tyranny-breakin’ goin’ on here today and the event organizers are doing their best to balance the competing interests of the participants and the press. How? Well, first of all we have a First Amendment area set up for the press. We will be providing folks for them to interview throughout the day but they will not be allowed to roam freely in the event area. They will, I am sure, try to interview folks going in and coming out of the venue. Whether you talk them or not is strictly up to you. But I would urge caution because remember, there’s going to be some tyranny-defyin’ goin’ on here and anything you say, your identity, even your presence, may later be of interest to an unscrupulous state prosecutor who wants to enforce unconstitutional laws. The other thing is that there are groups out there — and the Southern Poverty Law Center comes first to mind — who specialize in masquerading as press, or who circulate through crowds at these events, asking provocative questions whose answers they can later use out of context to discredit people. Pretending to be participants, they take surveillance photos that they will later provide to their symbiotic agents of social control in the FBI and the DHS. This should come as no surprise. It is what they do. It is not for nothing that we in Alabama call them the Southern Preposterous Lie Center. But you should expect that. They are collectivists therefore they are liars. It is who they are. You might as well blame a rattlesnake for biting. But the thing is, they are not as noble as the rattlesnake because they give you no warning before striking. These folks are copperheads, people, pretending to be what they are not, so be advised.

As for the real press, this situation puts them at some risk as well. Anything they do here today, interviews, picture taking, video, may later haul them before a grand jury. This is a direct danger to their First Amendment rights to do their job without threat or interference. So as much as they might chafe under the restrictions of the First Amendment zone, I hope they understand that we’re trying to look out for their own interests as well as yours. After all, at the Bundy Ranch the press agreed to a First Amendment zone so it’s not the first time they’ve experienced this. So it’s not as great a challenge as, say, asking Hillary Clinton a serious question about Benghazi, or anything.

So, that being said, we will proceed as best we can to have a great event today, to celebrate our rights and responsibilities as free American citizens, and to nullify with our defiance Mike Bloomberg’s hateful unconstitutional law, purchased at the cost of his millions. American jurisprudence has long held that an unconstitutional law is null and void. But by your presence here today, you will nullify I-594 more directly and immediately. If it is later found to be “officially” unconstitutional, it will be redundant — FOR YOU HERE WILL HAVE NULLIFIED IT LONG BEFORE. And may God bless you for having the courage to be here. Somewhere, Sam Adams and all the Founding generation are smiling.

TAMPICO, WA- Even though Washington State passed a law expanding background checks on those trying to buy and sell guns, there’s some organizations who aren’t accepting the regulations within I-594. We spoke with some organizers who are hosting a gun expo and don’t plan to comply with the gun law.

A group called “Liberty for All”, is hosting an arms expo, where you can buy and sell guns freely.

They told us this afternoon it’s important for them to have this event, even though it’s against the law.

“Well, the importance of having an event like this is really about enforcing the constitution. The Washington state constitution says the right to bare [sic] arms shall not be impaired and impaired means to diminish and to reduce in any way. And we view 594, the passage of that and the result of Washington code as an impairment of the right to keeping bare [sic] arms. In the fact that it impairs our ability to buy and sell fire arms.” Said Sam Wilson of Liberty for All.

For a small fee, you can camp on site for the whole weekend at the Yakima arms expo. In addition to live music, food, and seminars, there’s a few speakers scheduled to appear. One of those speakers told us, they’re not going to comply with I-594

“We’ve always been forbearing in this. They passed a law and we backed up. Grudgingly, but we backed up. What we’re saying here today is, we’re done backing up, deal with it!” Says Mike Vanderboegh.

As controversial as this topic may be, Sam Wilson wants the skeptics to know that this event isn’t meant to be taken as a threat.

“Really, the one thing we’ve stressed all along is that this is peaceful. This is not any kind of threat or violence. This is a peaceful exercise of constitutional rights”

The arms expo is all day today and all day tomorrow and we were told that they’re expecting a big turnout.