Named to ask her two signature achievements in politics, the thoroughly unaccomplished Hillary Clinton stumbled for an answer. What she came up with was worthy of a scene in Being There:

Without looking it up on any liberal media news site, please list for me two Hillary Clinton accomplishments. You’re right, my bad. Please name one accomplishment.

Come on, you got this. Just one.

Russia: After her ill-advised efforts to appease the dictator Vladimir Putin by handing him a cheap plastic bauble (the infamous "reset" button), Russia has responded with an unprecedented wave of expansionism:

• As it became clear that Republicans would lose the White House in 2008, Russia invaded Georgia.

• This month, it restarted the proxy war with Ukraine.

• It is preparing for war in the Arctic, executing plans "to put 'Bastion' anti-ship missile systems at their Arctic bases in 2015, to go along with airfield improvements, aircraft deployments, and installation of mobile anti-air missile systems and early warning radars."

• It has resumed overt aggression against U.S. warships, begun executing joint military drills with Red China in the Mediterranean, stood fast as Iran's staunchest ally in its race to acquire nuclear weapons, and -- most importantly -- it paid the Clinton Crime Family off in exchange for one-fifth of all U.S. uranium, one of America's most precious military assets. 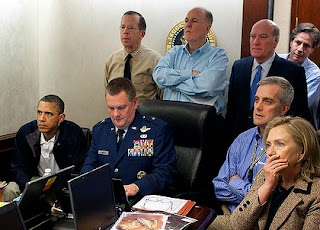 Her second one's even funnier.

She watched the Bin Laden raid on TV.

That's all she's got.

And this is the Democrat Party's de facto Presidential candidate?

This isn't a political party. It's an SNL skit.

She is basking in the reflected glory of Obama's only real accomplishment...the one that Valerie Jarrett talked him out of at least twice.

Oh, well. I think I agree with some of your frustration at that. She should have listed that as her first and only accomplishment. She messed up her gimmicky reset button schtick, and... standing up to Putin? Seriously. Vox is right, women think effort equals work... the way if a man picks up anything over 20 pounds, and she picks up a cup of coffee... well... that makes her equal. So if she drinks a pot a day, she has done twice the work! Obviously.

What has Putin done while she was Sec. St.? Ah, right, become extremely aggressive in Europe, helped all of our enemies, denied all of our overtures at the UN. If she means standing up as in backing down, while Zero leads from behind... Lib talk, gets confusing unless you have a crooked mind or enough experience dealing with it. Like watching a fly. Just keep a flyswatter handy. It does help.

I was in the cinema when the Avengers saved the world.

Whoa there. Not so fast..
According to a posted tweet, "I stood up to adversaries like Putin and allies like Israel and I was in the Situation Room on the day we got Bin Laden," Hillary boasts.
She confronted our ally! She stood up to Israel! Waddayaknow. A third accomplishment!!

To be fair, when Leon Panetta figured out that his standing orders gave him the authority to launch the raid that killed Bin Laden without seeking Obama's approval in advance (having gone this route three times already only to have Obama go to Valerie Jarrett who decided to refuse approval of the raid), Panetta went to Hillary for support - and got it. If she hadn't backed him, its doubtful Panetta would have ordered the raid on his own, and Bin Laden might still be alive today.

Not everyone is all bad.