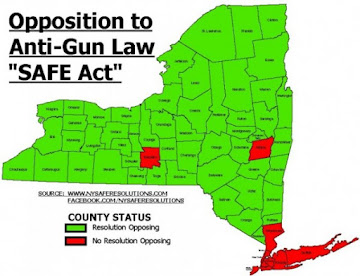 After a much-publicized court battle between State Police and gun groups, numbers for the registration of so-called “assault-style” weapons under Governor Cuomo’s unconstitutional SAFE Act have been released.

The numbers indicate that a vast majority of gun owners have not complied with the law which was hastily enacted in 2013 after the Newtown massacre.

Second Amendment advocates had contended that state police were not releasing registration numbers to avoid embarrassment for the administration by hiding the low rate of compliance from angry gun owners.

While the motivation behind keeping the numbers from public view are up for debate, the results are not – hundreds of thousands of gun owners have collectively told Governor Cuomo to take his gun-grabbing law and shove it.

Via the Daily News:

Fewer than 45,000 assault-style weapons have been registered in New York state since a landmark gun control act took effect in 2013, state records released Tuesday show, suggesting that Empire State gun owners are largely ignoring one of the signature elements of the watershed legislation.

In the years since Gov. Cuomo signed the New York Secure Ammunition and Firearms Enforcement Act, otherwise known as the NY SAFE Act, a total of 23,847 people have applied to register their assault-style weapons with the state, according to statistics provided by the New York State Police.

Those individuals themselves registered 44,485 assault-style weapons — a term whose definition under the law was expanded to include military-style features like a pistol grip and popular civilian models of the M16 and AK47 assault rifles — with State Police, the data, which was first obtained by the Albany Times Union, show.

By comparison, individuals in Connecticut, a state with roughly one-fifth the population of New York, registered more than 50,000 assault-style weapons after similar legislation was passed there in April 2013.

Officials have estimated than over a million such guns are in circulation in New York.

Under the SAFE Act, non-compliance with the registration of one’s guns could result in either a misdemeanor or felony charge, with a possibility of 1-4 years in prison.

Cuomo’s SAFE Act has turned hundreds of thousands of gun owners into criminals.

Upon releasing the numbers, the Times Union provided cover for the SAFE Act, saying the data “suggest(ed) widespread noncompliance.”

Assemblyman Steve McLaughlin tweeted that “The numbers don’t ‘suggest’ noncompliance. The numbers are a flat out declaration of non compliance.”

While there have been attempts to repeal or revise certain elements of the SAFE Act from lawmakers, Tom King, president of the Albany-based New York State Rifle and Pistol Association says that gun owners have spoken, and spoken loudly at that.

“It would appear the people have just bypassed the legislature and simply repealed it on their own,” he said.

The next step for people intent on protecting their 2A rights in the face of tyranny is to study the rights and powers of serving on a jury, for a fully informed jury will decline to convict a person indicted for violation of a law that is tyrannous.

New York's State Motto is "The Empire State", and that is more about government power and attitude towards its citizens than about its economic status.

It is only a matter of time before the government of The Empire State strikes back and attempts to make an example of some gun owner who has declined to register his previously legal firearm.

How many violations of our rights will Americans endure? This is not the country I remember. Now I realize how the Nazis gained control of Germany.