SEN. TED CRUZ TO UNITED NATIONS: Don’t Even Think About Adding Israel to the List of Terrorist Nations

Among the current crop of Republican presidential candidates, there is no more staunch defender of Israel than Sen. Ted Cruz. And, of course, with the possible exception of Rand Paul, all of the GOP candidates reject Barack Obama and the Democrat Party's deep, open hatred of Israel. This week Cruz directed a formal letter to U.N. Secretary General Ban Ki-moon, slamming the corrupt organization for its threat to add the State of Israel to the the U.N.’s list of “parties to conflict who commit grave violations against children”. 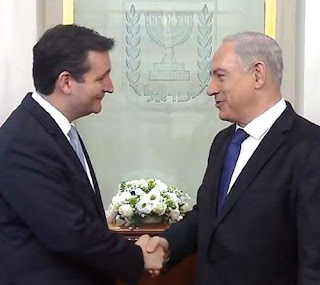 I write to you to convey my outrage that the State of Israel may be added to your list of “parties to conflict who commit grave violations against children.”[1] This designation would falsely and shamefully equate Israel with some of the most barbaric terrorist organizations around the world. The decision to add Israel is solely your decision to make and, therefore, is entirely in your power to prevent from taking place.

As you are well aware, this list is part of your annual report on Children and Armed Conflict.  It is my understanding that the Israel Defense Forces (IDF) may be added for the alleged violations described below.  The 2014 report on Children and Armed Conflict listed more than 59 parties including terrorist organizations such as Boko Haram, Taliban, Islamic State of Iraq and Syria (ISIS), and Al Qaeda who “recruit or use children, kill or maim children, commit rape and other forms of sexual violence against children, or engage in attacks on schools and/or hospitals in situations of armed conflict.”[2]

Such deplorable atrocities rightfully should be condemned by the United Nations. But there is absolutely no legitimate basis for adding Israel to such a list that includes parties which only represent the greatest of evil, honor death over life, and deliberately massacre women and children.  Unlike those parties on your list, Israel cherishes life and goes to extraordinary lengths to minimize civilian casualties during a conflict. In fact, Israel’s careful warfare tactics set an example for other nations to emulate, including the United States, which, according to the Chairman of the Joint Chiefs of Staff, General Martin Dempsey, recently sent a team of senior military officers over to Israel to learn more about these tactics.[3]

As the entire world observed last summer, Israel began its justified military operation in response to the kidnapping and murder of three Jewish teenagers by Hamas, two of whom were 16 years old and another 19 years old. As Israel engaged in an operation to find the Hamas terrorists responsible and bring them to justice for this heinous act, the conflict further escalated when Hamas and Palestine Islamic Jihad began to launch rockets and use underground tunnels deliberately targeting Israeli civilians, in an indiscriminate attempt to murder as many Israelis as possible. These terrorist groups are motivated by the stated desire to destroy Israel within any borders, not by any legitimate interest in making peace with Israel.

Acting in self-defense, Israel targeted only areas in Gaza that posed a threat and where members of Hamas and Palestine Islamic Jihad were located. The IDF took such steps as dropping leaflets, making announcements, placing telephone calls, and sending text messages directly to residents in Gaza to provide advance warning of an imminent attack to minimize civilian casualties. Members of Hamas and Palestine Islamic Jihad purposefully hid themselves and stockpiled weapons in densely populated areas including UN facilities, schools, hospitals and mosques.  They used civilians, including children, as human shields. Hamas’ main command center was located underneath the al-Shifa hospital in Gaza, which made the primary source of medical care to Gaza residents a legitimate military target if Israel’s objective was to destroy Hamas’ terrorist leadership. These terrorists even encouraged residents in Gaza to ignore the IDF warnings and remain in their homes in an attempt to use them as pawns in their ongoing propaganda war to demonize the Jewish State.  The very lives of Gaza residents are of no concern to Hamas and Palestine Islamic Jihad, for whom casualties are not an unintended consequence of war, but rather a deliberate objective. The United States Congress unanimously passed a resolution last year condemning their actions.[4]

Meanwhile to Israel’s northeast a civil war wages in Syria. In an action completely alien to the parties on your list, Israel has offered medical care, free of charge, to the casualties of this action.  Israeli physicians have treated and saved the lives of more than a thousand Syrians injured in that conflict, including children.  The contrast could not be more clear: Hamas and other terrorist groups exploit medical facilities as human shields to launch operations against Israel, while Israel uses theirs to provide cutting-edge medical care to people whose government’s avowed goal is to destroy the Jewish State.

Mr. Secretary-General, I submit that, should you determine to add more parties to your list, you should focus on those who actually exploit their own children as human shields, indoctrinate and raise their children to glorify violence and martyrdom, and target the children of others to achieve their destructive goals who should receive priority consideration, such as Hamas and Palestine Islamic Jihad.  There is absolutely no moral equivalence between radical Islamic terrorists, who are motivated by these factors, and Israel, which is justifiably motivated solely by the defense of her people.

Mr. Secretary-General, under no circumstances should Israel be added to your list. As the largest contributor to the United Nations, Congress will have no choice but to reassess the United States’ relationship with the United Nations and consider serious consequences if you choose to take this action.

[1] “Listing Parties to Conflict Who Commit Grave Violations Against Children,” Office of the Special Representative of the Secretary-General for Children and Armed Conflict, Accessed June 2, 2015, https://childrenandarmedconflict.un.org/our-work/sg-list/.

Please do a post on Cruz and the trade thing. I want to like him too, but I can't square that secret trade treaty thing that he promoted and voted for despite having his amendment to it rejected.

Even if it somehow turns out to be a good bill, how can he vote for a secret law?

Cruz said he saw it and leafed through it. He said that he looked for specific language that he would recognize as problematic and didn't find it. But he emphasized that he had only a cursory look. Actual reading of the bill would take much longer.

The UN has become a tool and apologetics organization for Islamist malevolents and insurgents.

Since when has any UN fool been deserving enough to be elevated to that level?