BALTIMORE: Liberal City of the Future 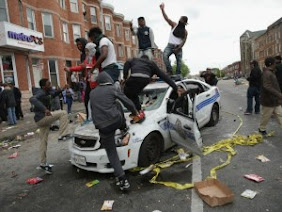 Culpability for the events in Baltimore over the past couple of weeks has perhaps inappropriately been directed exclusively at the police department. In all likelihood, the charges against the police involved in the tragic death of Freddie Gray are only symptomatic of the greater underlying problems of the once booming city. The greater tragedy is the destructive policies of over fifty years of liberal governance, which created the environment of disparity, poverty, and victimhood.

The city has been hemorrhaging jobs at an alarming rate for decades. And the most hard-hit have been the city’s black youth. Over 37% of 20-25 year-old black males are unemployed, versus 10% for white males of the same age. Black household median income is nearly half what it is for white households, at $33,610 and $60,550, respectively.

City policies have shrunk the population of the city by heavily penalizing the productive and earning households. Steve Hanke and Stephen Walters of Johns Hopkins University wrote in the Wall Street Journal earlier this week, “Officials raised property taxes 21 times between 1950 and 1985, channeling the proceeds to favored voting blocs and causing many homeowners and entrepreneurs — disproportionately Republicans — to flee. It was brilliant politics, as Democrats now enjoy an eight-to-one voter registration advantage.”

The result is a declining population, declining business enterprise, declining jobs, and severe blighting of the infrastructure. The city now has an estimated 16,000 vacant buildings and over 14,000 vacant lots. In the area of Sandtown-Winchester and Harlem Park, where Freddie Gray lived, more than 25% of the buildings are now vacant.

More than 40,000 residents have fled from the high tax, low job-opportunity confines of Baltimore, to the more favorable economic climate of Virginia. According to the Washington Times, they took a whopping $2.17 billion with them. No wonder Gallup found last year that 47% of the residents of the state said they would leave if they could. Interestingly, the only two states that registered higher in their 2014 poll were the states of Illinois and Connecticut, two more bastions of liberal tax and anti-enterprise policy.

Hanke and Walters explain that in order to counterbalance the high taxes that have driven so many jobs out of town, the city has been attempting to lure “developers with subsidies, and the developers, in turn, contribute to politicians to stay in their good graces. This makes for fertile ground for the city’s corruption.” The city’s ruling elite for decades has been pumping literally billions of dollars into development projects that were to mysteriously “trickle down” to the impoverished sections of town.

One example is the highly anticipated Inner Harbor project. As Todd Krainin wrote in Reason magazine, “Instead of revitalizing the city’s fortunes, the rise of the waterfront has paralleled the decline of basic functions. Violent crime remains high, public schools underperform, and the cityscape is blighted by the presence of tens of thousands of vacant buildings.”

Yet the visionary liberals ruling the city are pinning their hopes on yet another big-ticket project. They’ve committed $400 million in public subsidies to Harbor Point, the latest boondoggle of the city fathers.

Meanwhile, city residents have been losing their homes at an alarming rate. Especially hard hit are those most involved in the looting and rioting after Freddie’s death. Baltimore County Public Schools reveals that they’ve seen a 28% increase in homeless student enrollment over the past three years. According to Labor Department Data, 61% of Baltimore’s children live in poverty.

President Obama was surprisingly accurate in his assessment of the underlying issues which fostered the failures in Baltimore. He suggested that “the police alone can’t solve the problems of communities where there are no fathers who can provide guidance to young men; communities where there’s no investment, and manufacturing has been stripped away; and drugs have flooded the community.”

But then his liberalism kicked in. “I’m under no illusion that out of this Congress we’re going to get massive investments in urban communities,” he said. “And so we’ll try to find areas where we can make a difference around school reform and around job training, and around some investments in infrastructure in these communities trying to attract new businesses.”

The ideology which has governed Baltimore, Detroit, Illinois, California, and the nation for the past several years, has always been to create a new policy or social program, or additional taxes and spending (aka “investments”) to address our socio-economic ailments. It’s not “school reform,” “job training,” or “investments in infrastructure” that elevate and strengthen communities, it’s a thriving economy. And nothing douses entrepreneurism and economic growth like the massive taxing and regulatory burdens the leftist ideology is so totally invested in.

Perhaps none have addressed the issue as frankly as former Congressman Allen West has. He said last week, “Yes, the dirty little secret that no one wants to admit is that Baltimore, and so many other urban areas and inner city communities in America, are a reflection of the abject failure of liberal progressive socialist policies as advanced by the Democrat party. The truth is that it is a culture of dependency … that has created what we’re seeing play out in Baltimore.”

The policies that have shrunk Baltimore’s economy, stymied the job market, and blighted the cityscape are liberal policies. The policies that have created a lack of trust with law enforcement are liberal policies. It is highly improbable that city officials would ever fess up to their ownership. It’s much more convenient to cast blame wherever they can make it stick, in an obvious obfuscatory misdirection to avoid culpability. Exactly like the president did blaming congress for his own failures in broaching those issues on a national level.

Perhaps more white teens are employed is because they don't loot and burn their workplace.

Cities like Portland, Oregon are very liberal but are not like Baltimore or Detroit. Liberalism as such is of minor significance in comparison with demography. Portland is white while Detroit is black. That's what's important.