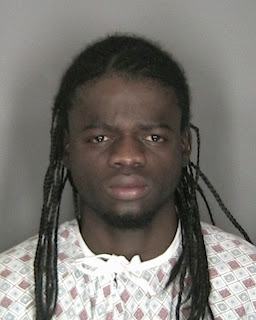 The Washington Times reports that Immigration and Customs Enforcement has flagged Darron Wint for deportation, should he ever be released from prison. That’s unlikely, since he murdered four people, including a 10-year-old boy who was tortured first, in the Washington, D.C., “Mansion Murders.”

Though ICE’s action is a necessary formality, to call it a day late and a dollar short is a ghoulish understatement. Little has been reported about how Wint got here, other than he came, legally, from Guyana in 2000 at age 20, probably under one of the family categories.

But the relevant question here is why this depraved monster was allowed to remain in the United States?

It’s been obvious for a decade that Wint was an undesirable alien who should have been sent back. “Wint has had more than 30 brushes with the law, including serious charges starting in 2005 as well as minor charges,” according to a news report. He had two restraining orders filed against him, in 2005 and 2006, for threats of violence against others, including his father, stepmother, and younger sister. Since then he’s had several assault convictions, plus multiple arrests for beating his girlfriend, stabbing a man, assaulting a woman at a nightclub, burglary, theft, vandalism, and showing up at his workplace with a machete and a BB gun. He should have been escorted back to Guyana years ago, long before he capped off his life of crime with mass murder.

A green-card holder is formally known as a “legal permanent resident” or LPR, but the “permanent” part just means his permission to stay here isn’t time-limited – as a foreigner, he can still be sent home at any time. After years of frustration with executive laxity and immigration-lawyer obstruction, Congress pushed back in 1996, requiring deportation of LPRs for a wider variety of crimes. But the effectiveness of such measures depends on an executive that is committed to immigration enforcement.

The Obama administration has refused to consider even illegal aliens for deportation until blood has been shed, let alone legal ones. The Washington Times report notes that only about 3 percent of ICE detainer requests in recent years have been for LPRs.

Green-card holders are prospective Americans, but they’re still just guests. Once they naturalize, we’re as stuck with them as with any other fellow-citizen who happens to be a miscreant (unless they lied on the naturalization application, in which case we can strip them of citizenship). But until they become citizens, they need to prove themselves worthy of living among us, and to that end, the number of crimes they commit should be zero. The default response to any criminal activity by a non-citizen should be removal from the United States, even if we somehow could know that the person wouldn’t go on to commit mass murder.

That would mean fewer drunk drivers, petty thieves, and welfare cheats in the country. It would also mean that Savvas and Amy Savopoulos, their little boy Phillip, and their housekeeper Vera Figueroa would still be alive.