The Supreme Court Has Ruled. Principled People Will Not Obey. 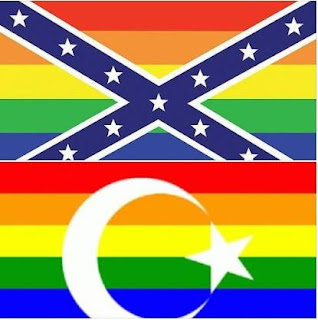 Following the Supreme Court’s illegal, immoral, and incredible “gay” rights decision, the White House (owned by the American people, not the President) was flooded with rainbow-color lights in celebration of that disgusting, dangerous, and decadent decision. Such impudence and defiance was an insult to America and a goading of God. However, be assured that God sees the evil and the good and He is involved in our world. Sometime His judgment seems slow, but it is always sure and severe. Judgment is on the way!

Former U. S. Supreme Court Justice Robert Jackson said about the Supreme Court’s authority, “We are not final because we are infallible; we are infallible because we are final.” That attitude is not only arrogant but audacious and asinine. However, the Supreme Court is not infallible (as only a fool would say) nor is it final (as only a fanatic would say). I remind you that their decisions are called, “opinions” and do not reach the level of the Ten Commandments–or even the Ten Recommendations. Same-sex “marriages” will continue to be abnormal, abominable, and aberrational even as shallow people applaud them.

Some have said, “The Court has spoken. That settles it.” Oh, really, what about Dred Scott? The Court, consisting of appointed, flawed individuals, has reversed itself over 200 times and it must be remembered that the Court is illegitimate when it usurps the position of legislatures. If the Court wants to write laws, they should resign, run for Congress, expose their financial souls and seek approval from the voters. The Justices are rogues in black robes drunk with power. The Court thinks it is omnipotent and omniscient and it seems to be almost omnipresent in our lives.

If laws that are contrary to the Constitution can be written by unelected officials then why do we have a Constitution? It means we are living under tyranny.

As a consequence of this opinion, everyone and all organizations will react. U.S. legislators must consider the “good behavior” clause in Article III, Section I of the Constitution that requires them to remove an erring justice from the court. That will happen when Hell has an enormous drop in temperature which can’t happen according to my theological beliefs. America will be free from the tyrants only when some of them reach room temperature.

State governors have an opportunity to affirm their sovereign authority and say, “We will not comply. You gave an opinion over something beyond your responsibility. We will not permit or give approval to behavior that is a threat to civilization. Same-sex ‘marriages’ will not be recognized in this state.” Then, the Court will charge the governors with contempt (which the governors will be guilty of as I am but I’m doing my best to conceal my contempt) and send U.S. Marshalls to arrest them. The governors can choose to use state troopers in their defense or choose not to do so. Bad position to be in but then no one asked for this except homosexuals and those whose highest ambition and reason for living is to satisfy homosexuals.

I don’t know what governors will do but I know what I will do and recommend other preachers do. I will not comply. I will live as if the decision was never made.

Pastors should inform everyone that they will never perform a same-sex “wedding.” Nor will the church ever be used for such activity. It is not enough for pastors not to perform such weddings; they must go on record of that decision.

Pastors should make it clear that unrepentant homosexuals will not be accepted as church members just as unrepentant fornicators, adulterers, thieves, abortionists, killers, and radical Liberals are rejected. Surely no pastor has to be convinced that he should never permit any secular authority to dictate to his church.

Pastors should prepare to lose the 501 (c) (3) tax status. Pastors have been negligent if they have not prepared church members for that event. The loss really should be no big deal since sincere Christians give 10 to 15 percent of their total income because they want to–not because of a tax advantage.

Preachers should continue to preach that homosexuality is perversion and if homosexuals do not repent they will be cast into Hell as will fornicators. At the same time the homosexual, like the adulterer, must understand that God loves him and is willing to forgive him at any time. And so is the church.

Pastors must warn members not to attend same-sex “marriages” of close friends or family members and refuse without alienating them if at all possible. With many, it will not be possible and the loss will be heartbreaking; however, any kind of approval will make one “a partaker of his evil deeds.”

Christian colleges should continue to refuse homosexuals as students so housing for same-sex “couples” on their campus is a moot issue.

If the Court should rule that gun ownership was illegal or that freedom of the press was now illegal, would any sane person comply? It is ridiculous to suggest that the Court can write law as in this case and in the Obamacare case then declare that the newly written laws are constitutional! No one gave these birds such carte blanche authority.

In 1804, Jefferson wrote: “The opinion which gives to the judges the right to decide what laws are constitutional and what not, not only for themselves in their own sphere of action but for the Legislature and Executive also in their spheres, would make the Judiciary a despotic branch.” That’s where we are today: despots reign.

Abe Lincoln said in his First Inaugural Address “that if the policy of the Government upon vital questions affecting the whole people is to be irrevocably fixed by decisions of the Supreme Court, the instant they are made in ordinary litigation between parties in personal actions, the people will have ceased to be their own rulers, having to that extent practically resigned their Government into the hands of that eminent tribunal.”

In 1832, President Andrew Jackson’s contempt of the Court’s decision in Worchester v. Georgia was on full display when he allegedly replied, “John Marshall [Chief Justice] has made his decision; now let him enforce it!” He was acknowledging that the Court does not have an army to enforce its decisions although it does have a few U.S. Marshalls that can arrest offending individuals.

The Court Jesters have made their ruling, now let them try to force thinking and committed Americans to accept perversion as normal, natural, and noble.

Be interesting if this does turn into another Dred in terms of its effect on people.

This and the OCare thing show SCOTUS is a joke (has been since the school prayer decision).

The fact the short shortstop and RBG didn't recuse makes this null and void IMHO.

The Church can no longer maintain this entanglement with civil government. Civil marriage - which has long been nothing more than a non-binding contract conferring certain legal and financial benefits - is now completely unrelated to the Biblical covenant of marriage. Christian pastors have no valid reason to intone "by the power vested in me by [some civil authority]" and sign a marriage license issued by that civil authority. To do so is to witness to the Church's participation in a civil procedure that is, by definition, contrary to the Church's calling.

“There ought to be two distinct kinds of marriage: one governed by the State with rules enforced on all citizens, the other governed by the Church with rules enforced by her on her own members. The distinction ought to be quite sharp, so that a man knows which couples are married in a Christian sense and which are not.” --C.S. Lewis; "Mere Christianity, Book 3, "Christian Behavior", Chapter 6, "Christian Marriage"; 1952]

"Then, the Court will charge the governors with contempt (which the governors will be guilty of as I am but I’m doing my best to conceal my contempt) and send U.S. Marshals to arrest them. The governors can choose to use state troopers in their defense or choose not to do so."

Oh, that would be awesome. I would rather settle our civil war with the Left now than let it drag on for another 100 years.

"I prefer peace. But if trouble must come, let it come in my time, so that my children can live in peace."
- Thomas Paine

Government regulation of marriage has been taken over by the Pink Swastika crowd. Bake the cake or they will send government to destroy your family business. They will grind you into the dust as far as they can like they did to the former CEO of Mozilla, Brendan Eich. This is homo-fascism in action.

If we have a separation of church and state, in order to protect godly marriage, we must separate marriage and state. It is time to get government out of the business of defining and regulating marriage.

When marriage is a private matter once again, the Pink Swastika crowd cannot force anyone to bake a cake they don't want to.

Marriage is a covenant that is a private matter between the husband and the wife and God. No government can define it. Indeed, the First Amendment denies the US federal government any power to express an opinion about a matter of the free exercise of religion. People wanting to enter in to that covenant may call upon their church to inform them as to the conditions and details of that covenant.

When government officials were not hostile to marriage as God defines it, churches and the public made the mistake of using government to define and regulate marriage. In the process, clergy allowed themselves to be used as agents of the State in administering state law that defined and regulated marriage.

That is EXACTLY what happens when a minister signs the MARRIAGE LICENSE at the conclusion of the church wedding he just presided over.

It is time for churches and clergy to completely sever their relationship with the State and to refuse to be agents of the state.

Starting yesterday, I advised my own church to IMMEDIATELY cease signing marriage licenses. Further they must move as quickly as possible to redefine their marriage ceremony as an "ecclesiastical matter", and even rename it to a more scriptural name, like Covenant Ceremony. When a young couple approaches a pastor to marry them he would instruct them that they should first get married in the eyes of the state, in a civil ceremony that is a matter solely between them and the State to complete. Only then would he perform the Covenant Ceremony in church.

The matter of whether or not the church can agree to perform a Covenant Ceremony for the couple is dependent upon them fully satisfying the ecclesiastical conditions.

We must realize that government has just declared itself hostile to the very culture and its religious values upon which the government was founded. This declaration has been a long time coming. It is not as if we couldn't see the skyglow of it over the horizon for quite a few years. Look at how giddy the secular forces of society are that they have finally thrown of what they considered to be the most important influence of Christianity in society, the meaning of marriage itself. If we think that fixing the law or fixing the Court or fixing Congress will repair this, we are missing the broad cultural shift. We must fix the hearts and minds of many Americans. Only God can do that on the scale required.

-- theBuckWheat enjoys his right to be anonymous

Well, we will see if any of these fantasies will really come true or if they are just wingnut wet dreams.

Hey, how come none of the above hasn't already happened in the states which already allowed same sex marriages?