Liz Peek, writing at The Fiscal Times, offers an incisive description of a president at war with the Constitution. His serial affronts to our precious system of checks and balances are made all the more egregious thanks to an opposition party leadership that is either afraid of conflict or simply crypto-conspirators. 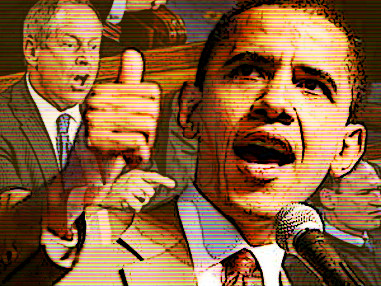 ...It turns out that you actually can’t run the country all by yourself, even if you’re the smartest fellow in the room. That’s proving quite a shock to our legacy-hungry commander in chief, who is responding to various setbacks with increasing indignation and hauteur. But, never, ever, moderation.

Mr. Obama has pursued an ambitious agenda since he entered the White House, increasingly acting alone. Ever since he won passage of Obamacare in 2010 through an odious series of back-room favors, and then got burned looking for a “Grand Bargain” on the budget with House Speaker John Boehner, he has eschewed the normal horse-trading with Congress and chosen to govern instead through executive actions and regulations.

...On the griddle currently is the president’s Trans Pacific Trade pact, which Democrats in Congress oppose. Members of his own party snubbed President Obama’s humiliating last-ditch overtures [in which] he promised goodies galore – rides on Air force One, Oval Office visits and campaign help for those willing to vote for his bill. He hoped to counter AFL-CIO head Richard Trumka’s reported threats that Big Labor will mount primary challenges against those who back the trade measure.

The offers – and the jawboning -- from the increasingly lame duck president flopped. Representative Peter Defazio from Oregon told reporters, “The President tried to both guilt people and impugn their integrity. I was insulted." Another House Democrat, according to CNN, said Obama "was fine until he turned at the end and became indignant and alienated some folks.” Republicans were not shocked; Obama has impugned their integrity as well as their honesty and patriotism repeatedly over the past seven years.

The TPP is essential to Obama’s foreign policy legacy. Elsewhere, his adventures overseas have been disastrous. The president has created a power vacuum in which Russia and China are increasingly belligerent, and ISIS spreads its influence unchecked. So, the famous pivot to Asia is all that’s left – and that hangs by the thread of the TPP.

Meanwhile, the courts may squash other portions of his vaunted legacy. The Supreme Court will rule shortly on the fate of Obamacare; this time the Roberts Court may pull the plug on the program. In response, President Obama is indignant, and he is once again being dishonest about Obamacare. (See “lie of the year”2013: “If you like your healthcare plan, you can keep it.”)

In recent days, Obama has rebuked the Court for taking up King v. Burwell, and suggested that the challenge to state-provided subsidies is but one more GOP-led partisan assault on his signature healthcare program. He claims the language of the law is simply a goof; that it was always expected that everyone would be eligible for subsidized health insurance, whether or not their state had set up its own exchange.

Mr. Obama has one small problem: Jonathan Gruber. The MIT economist and architect of Obamacare – he who so memorably claimed the law would never have passed but for the stupidity of American voters – at a conference in 2012 said this: "What’s important to remember politically about this is if you're a state and you don’t set up an exchange, that means your citizens don't get their tax credits.”

Denying subsidies to those living in states that failed to set up their own exchanges was integral to the Affordable Care Act. It was the stick, and the carrot. But, it failed, because opposition to Obamacare was intense, and many state legislatures chose to not to participate. They recognized that the cost of setting up the exchange would be high, and that their citizens generally opposed the giant overturn of our healthcare industry. Those 37 states that did not set up their own exchanges were lawfully rejecting the president’s healthcare program – a law passed with not one Republican vote.

President Obama’s large-scale executive action on immigration is also threatened by the courts. At the end of last month, the federal Fifth Circuit Court upheld an injunction from a judge in Texas that put the program on hold. As a result, Obama’s plan to protect millions here illegally from deportation cannot be implemented. Twenty-six states have sued to overturn the program, claiming it had not been enacted legally; this initiative could remain mired in the courts for some time.

Meanwhile, the Supreme Court is deciding the fate of an impending 2012 Environmental Protection Agency rule that for the first time requires power plants to reduce emissions of mercury and other pollutants. The case hinges on whether the EPA’s estimate of $9.6 billion in annual costs emanating from the regulation is, as required under the Clean Air Act, “appropriate and necessary.” A negative ruling would set back Mr. Obama’s environmental program, which has largely relied on EPA regulations rather than laws established by Congress.

The founders of our country understood that too much power in the hands of the executive branch was unwise. In the past seven years we have seen that they were correct. President Obama has backed one major measure after another that Americans dislike; unlike most of his predecessors, Mr. Obama has never moderated his positions to reflect the country’s opposition. Thankfully, we have checks and balances on the president’s authority provided through Congress and our court system. President Obama’s real legacy may well be reaffirming the wisdom of those constitutional restraints.

One can only pray that Ms. Peek is correct and that the courts and Congress will begin to mop up the domestic and foreign policy disasters Obama has left behind him like the devil's own snail trail.

Audio - Rush Limbaugh - Why Does Hillary Get More Respect from Conservative Media Than Donald Trump ?

I am totally shocked that THE FISCAL TIMES would print such a non-Progressive article. I thought they were Socialists!