Anti-American Nutjob Father Pfleger Emerges From Under His Rock 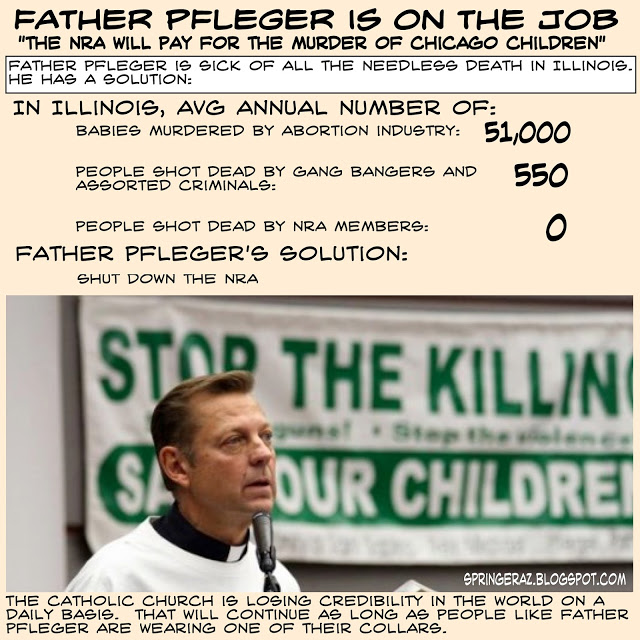 Rev. Michael Pfleger: NRA 'Will Pay for the Murder' of Chicago Children

On June 6, Reverend Michael Pfleger listed recent shootings in heavily gun-controlled Chicago then said the NRA “will pay pay for the murder of our children.”

He was joined by Reverend Jesse Jackson and the Brady Campaign to Prevent Gun Violence president Dan Gross... Pleger, Jackson, and Gross rallied outside of Chuck’s Gun Shop, where Jackson recently rallied for the ban of guns already banned in Chicago.

...Pleger said we need to “make gun ownership responsible,” that we need to “title guns like cars.”

He ended his speech by calling out the NRA specifically, saying:

At the end of the day you can argue with us [and] you can call us names, but you got to deal with God. And the blood of our children is on your hands. And you will pay for the murder of our children.

This is incitement, plain and simple.

Pfleger won't dare name the real culprit for the epidemic of crime in America's inner cities: big government. Big government incentivizes fatherless families, so we get fatherless families. We get educational blight and failed public schools protected by the diabolical alliance of Democrats and Teachers Unions.

We get high rates of crime and imprisonment.


Related: How we lost the war on poverty.

As a Roman Catholic, I just don't understand why Fr. Pfleger is allowed to speak this way. Why isn't his Bishop prohibiting this? Something is not right here.

They don't call him Flaky Pfleger for nothing!

I love America, America left me
I love the Catholic church, the church left me

He is where he belongs. As above, so below, and more so.

Faaathur Phlem isn't much of a religious leader.He's more of a political hack wearing the clothes of a priest.The whole wolf in sheep's clothing thing.

he is probably trying to cover for touching young children