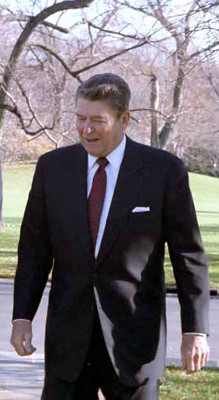 One of President Ronald Reagan’s leading biographers says that Reagan carried a concealed handgun for about 14 years following his attempted assassination at the hands of John Hinckley Jr., confirming a recent claim made by author Brad Meltzer.

Meltzer, a best-selling thriller writer, wrote in the New York Daily News over the weekend that he was told about Reagan’s heat-packing ways while researching an upcoming novel. While touring the headquarters of the Secret Service, Meltzer says one of the agents there mentioned that Reagan carried a revolver in his briefcase during his years as president.

“Whatever you think of Reagan, you have to admit, he had a black belt in badassery,” Meltzer wrote.

The Daily Caller News Foundation reached out to Craig Shirley, a notable Reagan biographer, who said that Meltzer’s claim is completely true and independently confirmed by his own research.

Shirley told TheDCNF he learned about Reagan’s gun while researching his upcoming book Last Act: The Final Years and Emerging Legacy of Ronald Reagan. He said Reagan’s secret gun was revealed to him by Stephen Colo, a retired Secret Service agent who led Reagan’s security detail after he left the White House.

Shirley offered a bounty of new information about Reagan’s gun that was absent from Meltzer’s original piece. While Meltzer didn’t say when Reagan started carrying, Shirley confirmed the practice began after Reagan was shot and nearly killed by John Hinckley Jr. on March 30, 1981.

“After he recovered, he said, I think in his diary, ‘Getting shot hurts,” Shirley said. After that, he resolved to have his own protection in addition to that offered by the Secret Service. The gun, which Shirley says was likely a .38-caliber revolver, was kept in Reagan’s personal briefcase, which he routinely carried with him onto Air Force One and Marine One.

He said that Nancy Reagan wasn’t thrilled and the Secret Service felt similarly, but Reagan insisted.

“Who’s going to say no to the President?” he said.

Reagan carried the gun after his presidency as well, Shirley said, and had it until it was confiscated by Colo a year or two after his 1994 Alzheimer’s diagnosis, due to the president’s diminishing capacity.

What’s happened to the presidential firearm in in 20 years since? Sadly, Shirley says he doesn’t know, and apparently nobody else does either.

“I asked the Secret Service, the Reagan Library, everybody,” he said, but the gun was not to be found.