Barack Obama turned a beautiful speech into another politicized attack on gun owners and white people. 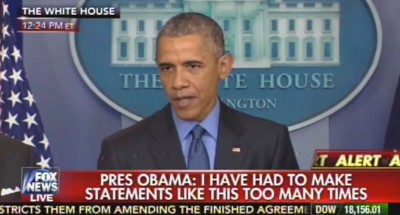 He blamed the Second Amendment in part.

“Let’s be clear, at some point we will have to reconcile with the fact this type of mass violence does not happen in other advanced countries.” [That’s blatantly untrue. Where’s the coverage of people with guns who stop mass slayings? Check this out on The Gateway Pundit.]

He got in his dig at Republicans and other Second Amendment supporters, insinuating we are responsible for this horrible slaughter.

“It is in our power to do something about it and I say that recognizing the politics in this town foreclose a lot of those opportunities right now.”

He said Americans “have to acknowledge it” and “come to grips with it.”

The murderer was given the gun as a birthday gift from his father. The only way to have prevented him from getting a gun is to eliminate the Second Amendment.

Loretta Lynch spoke and said she wanted everyone to know that the government wants “everyone affected by this tragedy to know that we will do everything in our power to help heal this community and make it whole again.”

Why do we need the government to heal the community? Why? So Barack Obama can spout some more of his venom?

“The fact that this happened in a black church also raises a dark part of our history. This is not the first time the black churches have been attacked and we know that hatred across races and faiths pose a particular threat to our democracy [it’s a Republic, not a democracy] and our ideals.”

He then made some eloquent comments, but not until he insinuated all whites are guilty and all blacks are victims over this one lunatic.

Why couldn’t he leave this alone for a few days? Why does he politicize horrific events immediately and then pretend he gives a care about the people involved? This isn’t the time to play politics.

Government and banning guns can’t solve the sickness in our society that leads to crimes like this.

Why did Obama and/or Lynch send the FBI to Charleston, SC? This was a mass murder---not a kidnapping. It is as though Obama thinks the State of SC lacks the skill to handle this case --- that only the Federal Government is capable of handling the case.

The leader of the voluntary human extinction movement is busy these days. He and his ilk are are desperate to get us to do their work of the devil for them. He and his minions are lazy tyrants. Spoiled by decades of free reign and really bad rule over others.
They ignore wars of extinction against what is good and right, the things worth fighting for, and people who are willing to stand up against such evil men in this world, have a tendency to work both ways.

Can you feel it?
The mounting pressure, the resistance to these clowns running things?
It is almost palpable. It is grass roots in the most natural and legitimate way.
Pretty soon, a breakout cascade of refusing to comply with these psychopaths will transpire.
When this plurality of people who decide they have had enough reach that profound gestalt they are indeed a plurality, there is no stopping such a legitimate movement, people in this plurality become not only manifest in resistance to tyranny, they can not be denied by any force on Gods green Earth.
See, I believe in something, my faith in this is unshakable, like the bedrock of my liberty, I have made the choice, and understand the truth, there is a line I will not cross, I won't back down, no matter I am faced with. Comes a time when a freeman must spit on his hands and make a stand. It is the defining moment in everyones freedom and liberty.

Call it whatever you want, it is rightful resistance to evil, the truth is this is what the bastards are terrified of. They understand down to their wicked bitter souls it is an existential threat to their very survival. It is an unstoppable force of nature, once let loose it can not be put back, not by anyone, not even those who are the resisters. Once unleashed there is no turning back, no negotiating, no mercy, and no reason it should stop until those who pushed us into a corner are no more.

Can you feel it?

Now that so-called “liberals” are proudly displaying their disdain for Liberty calling for the removal of the Confederate battle flag from our midst. They say that the losers in a war shouldn’t get to fly their flag, and they’ve arbitrarily decided it ‘represents racism’ not to mention it was right there with the Charleston Church shooter….

Okay, let’s apply that rationale to the flag of Mexico – they lost a war wit the US and as for racism, we should check with ‘La Raza’ on that score. In addition the Mexican flag represents a clear and present danger to US sovereignty via the invasion of illegals that it is fomenting. The illegal invasion threat is much more dire that a few good ol’ boys flying the Confederate battle flag from the back of their pickup trucks.

Turnabout is fair play. What say you people who denigrate Liberty on a daily basis and yet still maintain the moniker of “Liberal”? Can we apply your twisted logic to another symbol? In your head long rush to suppress thought crime, can we apply the same rules you use or is your speech sacrosanct?

Stew on that “Liberals” whilst you celebrate one more of your victories against freedom.