SURE, WHY NOT? Clinton Crime Fund Taps "Mistress of Disaster" Jamie Gorelick as Defense Counsel

No, it's not a headline from The Onion. It's real. And it's spectacular: 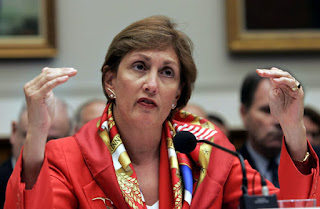 Bill Clinton, Hillary Clinton and the Clinton Foundation are asking a federal judge in Florida to toss out a conservative legal activist's lawsuit claiming the former secretary of state used her private email account and the promise of changes in U.S. foreign policy to shake people down for speaking fees and donations to the foundation.

The Clinton Foundation has also pulled in a legal big-gun, former Deputy Attorney General Jamie Gorelick [Ed: "The Mistress of Disaster"], to lead its defense against the racketeering suit filed in March by Larry Klayman of Freedom Watch.

In her first filing in the case last week, Gorelick — a partner at D.C. law firm Wilmer Hale — called the claims in the lawsuit "fatuous." She argued that Klayman's grievance is derived from what he contends were incomplete responses to Freedom of Information Act requests his organization filed with the State Department. Klayman contends those responses could not have been complete because Hillary Clinton used a private email account and server for all her email and only returned some of her messages to the department at its request last year.

Gorelick and longtime Clinton personal lawyer David Kendall argued in separate motions filed last week with U.S. District Judge Donald Middlebrooks that any of Klayman's issues with the FOIA responses should be resolved through litigation pending in Washington against the State Department, not through a racketeering lawsuit against the Clintons personally and the foundation... "Plaintiff has no constitutional right to Secretary Clinton’s e-mail," Kendall wrote in a parallel motion filed by the Clintons.

Gorelick is known worldwide as "The Mistress of Disaster" for her involvement in not one, but two, trillion-dollar disasters.

Oh, and Politiho's Josh Gerstein notes that Gorelick's last federal litigation experience was also a catastrophe: she represented Duke University in its infamous persecution of the school's lacrosse team for rapes that never occurred.

Duke was forced to settle with members of the team after Gorelick's stellar work.

Come to think of it, the Clinton Crime Fund's employment of Gorelick may be the best thing that could have happened. For us.