DEVIL’S PACT: Treasonous ObamaTrade Bill Sets Stage for Global Governance, Which is Why You Can’t Read It 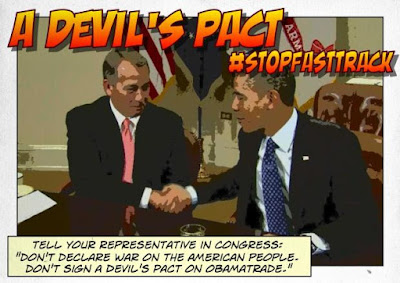 It is a rarity that I agree with today’s union bosses. However, in this instance, as unions are currently doing to Democrats supportive of fast-tracking ObamaTrade, Republican lawmakers who have bending over (backward) to appease transnational corporate lobbyists by backing the secret trade pact called the Trans-Pacific Partnership (TPP) need to hear from voters—and fast.

According to the Detroit News, fast-track will be voted on in the House of Representatives this week.

In the House, nearly all Democrats oppose the measure, which may have the support of fewer than 20 Democrats. The White House will rely on Republicans to get the 218 votes needed to approve the bill.

Although unions have dubbed ObamaTrade “NAFTA on steroids,” it is more than that.

Here are some of the things that ObamaTrade does, according to one source:

Moreover, according to Forbes, under the draft provisions of the TPP to be leaked by Wikileaks, “countries could be barred from trying to control where their citizens’ personal data is held or whether it’s accessible from outside the country.”

…and, by and large, this monstrosity has been negotiated in secret.

Inside-the-beltway Republicans like Sen. Mitch McConnell (R-KY) 64% and Rep. John Boehner (R-OH) N/A% are used to saying one thing and doing another when it comes to fighting for America, so it is no real surprise they have signed onto ObamaTrade.

However, it seems as though some of the Class of 2010 and other so-called “conservatives” have begun to get too acccustomed to beltway brown-nosing as well.

Republicans in the House who are supporting ObamaTrade appear to be either so awash with corporate lobbyists’ wine, or haven’t bothered to read the bill—and, quite possibly, both.

Notwithstanding the fact that Republicans trusting Barack Obama with anything more than reading parking meters is a fool’s folly, it is the Republicans who have seemed to have formed a Devil’s Pact with the President on the secret trade deal.

In addition to unions opposing granting fast-track to Obama on TPP, a wide array of conservatives are also against it. This list includes the Americans for Limited Government, the American Family Association, Center for Security Policy, and the Eagle Forum.

Even Donald Trump is opposed to the idea.

Like ObamaCare, the Obama Administration is relying on the “stupidity of voters“—except, this time, it is the stupidity of Republican voters in Congress—to get their deal done.

As stated at the top of this post, it is a rarity that I find myself in agreement with today’s union bosses.

However, like ObamaCare (which unions wholeheartedly supported), ObamaTrade is a bad deal for America and it must be stopped now.

Americans, conservative and liberal alike, have much to be concerned about with fast-tracking TPP. It is up to voters to let their representatives know now that selling out America to a bunch of crony capitalists around the world is a declaration of war on the American people.

Light up your GOP congressperson’s switchboards this week.

Too late. The "fence sitting" democrats were bought of with $$ - aka BRIBERY. Our politicians are nothing but whores. Sickening.

Lie in bed with Boehner, wake up with Obama as a king.
The scumbag is as pathetic as the GOP voters who tolerate him.