At what point does a President’s actions become treason?


Critics say Washington’s funding cut for a program in Lebanon to develop alternative Shiite political voices to Hezbollah is an effort to appease Iran...Coming on the heels of an expected deal with Iran, it is bound to generate much speculation about possible ulterior motives. 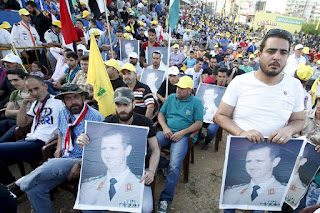 The group that received the U.S. support and critics said that the Obama administration was curtailing its efforts to counter Hezbollah to avoid confronting Shiite Iran, with which it is negotiating to conclude a historic nuclear accord this month.

These people say the funding cut imperils a program that underpinned criticism in Lebanon of Hezbollah’s growing role in supporting President Bashar al-Assad in Syria’s civil war... "We are more immediately worried about the message this sends to Shia communities, in Lebanon and the region, about their options for the future," said Lokman Slim, director of Hayya Bina, the organization that lost the funding.

...the U.S. move feeds into an increasingly alarmed narrative held by many Arab leaders who say that U.S. and Iranian interests appear increasingly aligned—at their expense. Both Washington and Tehran are fighting Islamic State forces in Iraq and Syria, with U.S. conducting airstrikes against the militants, but notably not against Mr. Assad’s Iran-backed regime.

Hezbollah, which the U.S. classifies as a terror organization, receives extensive funding and arms from Iran. It has deployed 10,000 soldiers in Syria to back Mr. Assad’s forces and counter Islamic State, U.S. officials estimate.

Saudi Arabia’s leadership, which supports the exiled leader of Yemen, was concerned when the U.S. last month met secretly with the Iran-backed Houthi rebels there that caused him to flee.

Most significantly, the Obama administration is seeking to conclude a deal with Iran by June 30 to curb its nuclear program in exchange for a lifting of international sanctions.

I don't know how else to say it. Barack Obama seeks a nuclear Iran that has hegemony over the Middle East.

I leave his rationale as an exercise for the reader.