If this doesn't remind you of the old Soviet Union, you probably grew up after 1989. They have a word for this in other societies: Propaganda.

Federal contractors receiving money for projects funded by the American Recovery and Reinvestment Act (ARRA)—the $862 billion economic stimulus law President Barack Obama signed in February 2009—have been encouraged and, in some cases, required by the administration to post signs that say their work is funded by that specific act. 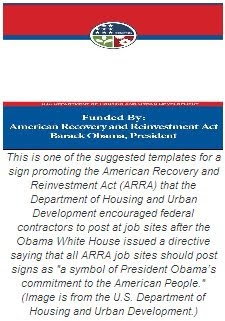 ...The Department of Housing and Urban Development recommended one model sign that included these words: “Funded By: American Recovery and Reinvestment Act/ Barack Obama, President.”

..."Projects funded by the American Recovery and Reinvestment Act (ARRA) will bear a newly-designed emblem," said the OMB directive. "The emblem is a symbol of President Obama’s commitment to the American People to invest their tax dollars wisely to put Americans back to work."

...the Department of Housing and Urban Development even suggested a model sign that gives Barack Obama personal credit as president for funding the project.

...“It’s blatant propaganda on the part of the Obama administration to take credit for the spending of public dollars,” said Schock, who has investigated the matter as a member of the House Oversight and Government Reform Committee. “It’s propaganda that will be worthless in a matter of years. To think that we can spend $200 million on a bunch of sheet metal signs that will end up in a landfill somewhere is a poor use of public funds at a time when our nation is facing mounting deficits.” 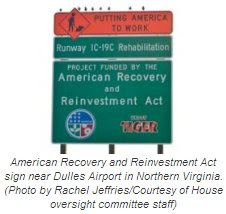 ...“I’m less concerned about the perceptions of the policy makers than I am of the grant recipients,” Schock said. “I’ve spoken with recipients in my district who thought that if they did not participate in the promotional signs, recovery money would be less likely." ...He added, “Without a requirement, most units of government would choose to spend that money putting people to work.”

...The HUD e-mail, cited in the IG report, included an attachment with two templates for a sign. One included a blank white space where the details of the specific project could be inserted over the words, “Funded By: American Recovery and Reinvestment Act; Barack Obama, President.”

...The White House did not respond to requests from CNSNews.com for comment by phone and e-mail... How many of President Obama’s signs have been posted at highway projects around the country? “That’s a question for the states,” a Federal Highway Administration spokesman told CNSNews.com. “It would be like asking how many stop signs are out there. We don’t know.” But the spokesman did confirm that the signs themselves are paid for by Recovery Act dollars.

The moment I navigated to the staggering The End Of Nations story I said that Doug Ross @ Journal's commenters absolutely must express their opinion on this link: http://hubpages.com/hub/Global-Union-The-End-Of-Nations

I visted Chicago recently. I quickly learned that some guy named "Daley" was mayor there. His name was on every government building and signage, even in one case chisled in stone.