"Congress shall make no law respecting an establishment of religion, or prohibiting the free exercise thereof; or abridging the freedom of speech, or of the press; or the right of the people peaceably to assemble, and to petition the Government for a redress of grievances." [U.S. Constitution: First Amendment]

In his farewell address to the nation, President George Washington noted the strong affinity of faith to the American republic, stating, "Of all the dispositions and habits which lead to political prosperity, religion and morality are indispensable supports." 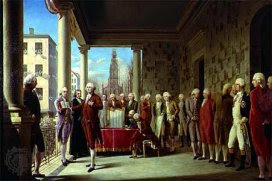 As evidenced in their writings and statements, the nation's founders believed inherently in the role of faith as the underpinning of a moral system of government. Government could only be moral if it recognized that human rights were granted by God, not man, and were therefore irrevocable by temporary politicians or potentates.

The Declaration of Independence proudly trumpeted the bond between God and the founding of the Republic, as the nation's fate hinged upon "...a firm reliance on the protection of Divine Providence."

And, for many older Americans, the Pledge of Allegiance -- "I pledge allegiance to the flag of the United States of America and to the republic for which it stands, one nation under God, indivisible, with liberty and justice for all" -- served as a daily affirmation of the role of faith in the nation's founding.

Judicial Activism and the 'Separation of Church and State' 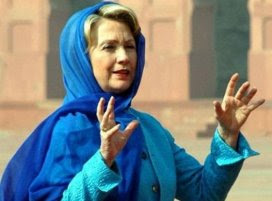 Despite all evidence to the contrary, judicial activists have dismissed the founders' bedrock principles related to faith. To do so, they have invented the notion of 'Separation of Church and State' from whole cloth. The First Amendment was, of course, intended to prevent the establishment of a state religion -- like the Church of England. But it was never intended to remove the role of Judeo-Christian beliefs from the halls of government; the motto "In God We Trust" on our currency serves as the most tangible reminder of this fact.

Nevertheless, using the canard of church-state separation, judicial activists -- led by atheists and Statists -- have banned nativity scenes on public property, prohibited the display of the Ten Commandments, and removed crosses that memorialized fallen state troopers.

In other words, the very Judeo-Christian traditions upon which our founders relied have been capriciously excised from the public square. If given the chance, activist judges would likely censor the Declaration of Independence and rewrite American history to achieve their vision of a barren and secular society.

Which makes the State Department's recent activities so very bizarre.

The State Department's Curious Book on Being Muslim in America

An anonymous commenter points us to the Obama-Clinton State Department's bookshelf. Its "Diversity" section features a book entitled Being Muslim in America (PDF) which, "[i]llustrates in word and image that practicing the Muslim faith is fully compatible with being American, and that Muslim Americans are endowed by right with the same freedoms, privileges, and responsibilities as other Americans." 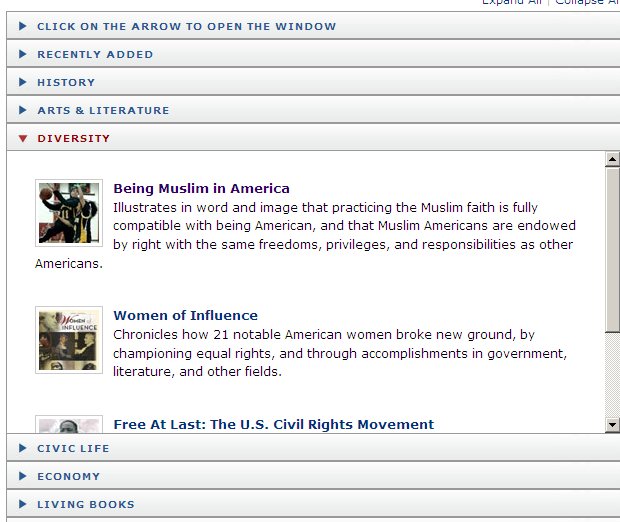 Did anyone ever say otherwise? What would be the reason for this publication?

The State Department has chosen precisely one religion for which it offers its support: Islam. 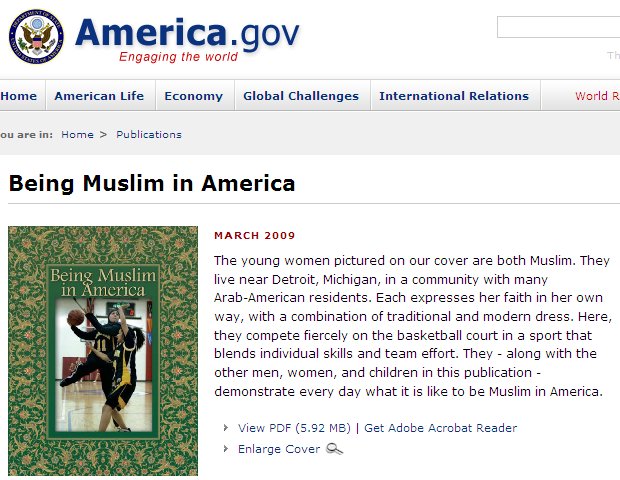 Try as I might, I could find no similar publications entitled:

And yet, within weeks of Barack Obama taking office, the State Department had created a guide to being Muslim in America.

An Homage to Sharia Law and More Apologies for America

From its cover photograph featuring a (presumably) Sharia-compliant basketball uniform to its opening graph -- an apologia for America's imperfections -- the guide is as disturbing as it is un-American.

I love America not because I am under the illusion that it is perfect, but because it allows me — the child of Muslim immigrants from India — to participate in its progress, to carve a place in its promise, to play a role in its possibility.

In other words, America has a long way to go. Which is why so many people are trying to get here from the largely third-world hellholes their own failed governments have created. 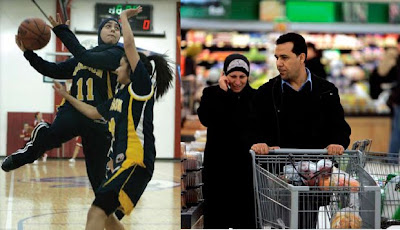 Another photograph features a woman -- covered head-to-toe in Sharia-compliant garb -- walking behind her husband while shopping, as many Islamic countries require.

Furthermore, the State Department insists that Americans are irrational and intolerant people, especially when it comes to Muslims.

A new, truly American Islam is emerging, shaped by American freedoms, but also by the aftermath of the September 11, 2001, attacks. Even as surveys by the Pew Research Center and others show that Muslim Americans are better educated and more prosperous than the average, the terrorist attacks — planned and executed by non-Americans — raised suspicions among other Americans whose immediate responses, racial profiling among them, triggered in turn a measure of Muslim-American alienation. Sadly, suspicions of this kind are not uncommon — in the United States or in other nations — during wartime or when outside attack is feared. But 2008 is not 2002, when fears and suspicions were at their height. Context is also important: Every significant immigrant group has in the United States faced, and overcome, a degree of discrimination and resentment. 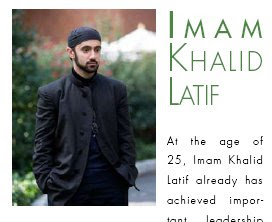 Also featured in the book is Imam Khalid Latif, who serves on "the Board of Directors of CAIR-NY, where Latif’s sister is also a key player. CAIR, is the unindicted co-conspirator to the largest terror-financing conviction in U.S. history, and currently shunned by the FBI and both Democrats and Republicans alike for its connection to, and support of, Hamas."

Latif also strongly objected to NYU's publication of the Danish cartoons depicting Mohammed, to the point that the school caved into his demands. In this case, the First Amendment was dismissed so blatantly that the decision was roundly criticized by the Foundation for Individual Rights in Education [FIRE], which asked NYU "to reverse course and stand up for freedom of speech."

Finally, Latif also sits on the board of the Muslim Consultative Network [MCN] which is reportedly run by Adem Carroll of the Islamic Circle of North America. ICNA is said to support a variety of terror groups including al-Qaeda, Hamas and Jamaat-e-Islamia.

In its choice of wording, photographs and representatives, the State Department appears to implicitly support both Sharia and a subtle form of extremism.

After all, Sharia is a political system consisting of its own laws; and it is completely antithetical to the United States Constitution.

How is it that a Nativity Scene on a town square is somehow 'unconstitutional', but the State Department's affirmative endorsement of Balkanization and the intolerance of Sharia is somehow acceptable?

Where is the ACLU?

Where are the atheists?

Where are the liberal activists who complain endlessly about separation of church and state, at least when it concerns Christians and Jews?

These are rhetorical questions, of course, because the agenda -- while hidden from plain sight -- is obvious.

at 9:43 AM
Email ThisBlogThis!Share to TwitterShare to FacebookShare to Pinterest
Labels: Democrats, extremism, Hillary, Obama

Thank you for posting this. There is a lot more Islamic stuff on that website. Someone needs to preserve it before the bureaucrats take it down and pretend it never happened.

For Christians the leftist mantra is "separation of church & state". For Islam it is "freedom of religion".

You ask where are the Atheists.
http://blogs.america.gov/bythepeople/tag/christmas/

The link will take you to America.gov’s blogs. And they gladly link you to an Athesist site, while mentioning a book called The God Delusion, by Richard Dawkins.

Included is a gratuitous picture of a “Tree of Knowledge” under a Christmas heading.