Human Rights Watch has called on a Saudi court to reverse a decision to drop charges against a couple who severely beat their Indonesian maid.

The judge awarded a mere $670 compensation to Nour Miyati, who was tied up by her employers and left in a cellar for a month in 2005. The 25 year old woman was left without food and contracted gangrene as result of her ordeal. 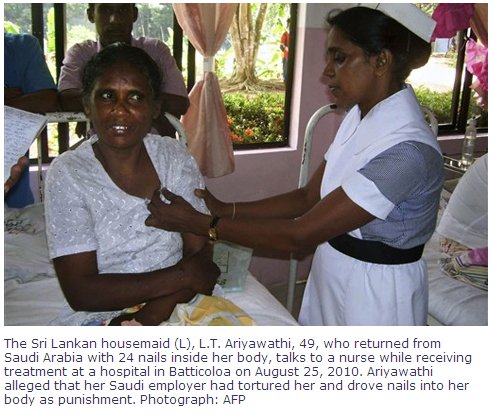 The woman who employed her was initially sentenced to 35 lashes, but later had her sentence overturned. Her male employer was not charged with any crime.

According to Human Rights Watch, the ruling "sends a dangerous message to Saudi employers that they can beat domestic workers with impunity and that victims have little hope of justice."

This comes on the heels of word that an Indonesian servant was tortured by another Saudi couple.

A Sri Lankan housemaid with 24 nails embedded in her body after allegedly being tortured by her employer is to undergo surgery on Friday, her doctors said.

L. T. Ariyawathi, 49, said her employer in Saudi Arabia inflicted the injuries on her as a punishment. 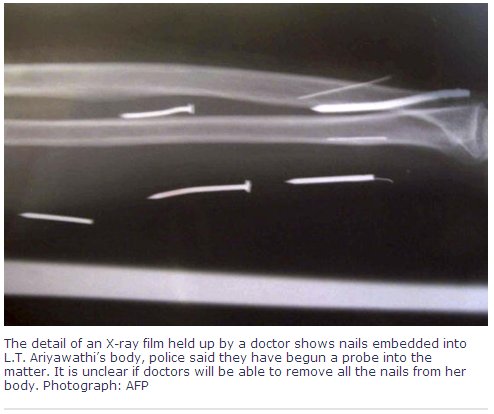 She flew back to Sri Lanka last week and was admitted to Kamburupitiya hospital in the island's south, hospital director Prabath Gajadeera told AFP on Thursday.

"She was brought in complaining that her Saudi employer drove nails into her body, and X-rays showed that there were 24 nails and a needle," Gajadeera said. "There is one nail on the forehead, just under the skin."

The nails were up to two inches (five centimetres) long and were mostly beneath the skin of Ariyawathi's hands, feet and legs.

Almost exactly a year ago, reports surfaced that another maid had been tortured to death in Saudi Arabia.

A 28-year-old maid described only as “Asian” was beaten to death by her sponsor and his wife last Friday, a local daily reported on Monday... Police confirmed reports the maid was brought to a local hospital in Jubail dead with multiple wounds and burns to her body and head. Police said an iron rod was used to beat and burn the maid. 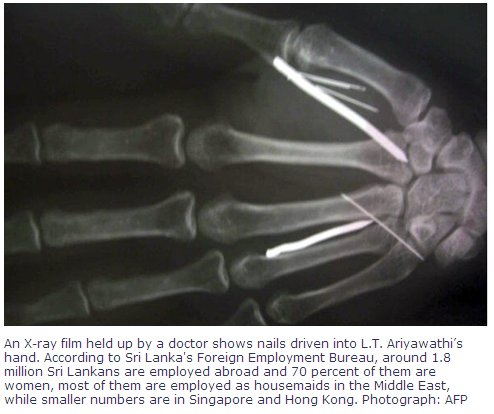 Police have arrested the 36-year-old Saudi and his 29-year-old wife... The couple claimed that they had to resort to the beatings because of the maid’s attitude. The husband justified his behavior saying the maid repeatedly failed to carry out his orders and also neglected work inside the house.

The husband, during the interrogation, cast doubts about the maid’s character, claiming that she did “indecent” things inside the house. He said he took the iron to the maid’s body after throwing water on her.

According to Migrant Rights, this kind of outrageous abuse is rampant in the Kingdom of Saudi Arabia.

* * *
But remember, kids: according to the Ground Zero Mosque's Imam Rauf, it's America that's screwed up.

at 10:17 PM
Email ThisBlogThis!Share to TwitterShare to FacebookShare to Pinterest
Labels: extremism, World

More of that Charles Johnson "pretzel logic". The maid complained about the treatment she received by Muslims. This means that the maid is a bigoted, evil,vicious right wing Glenn Beck, Rush Limbaugh listening hater! What other explanation could there be?


I read the sad news about the torture of Indonesian maid in Saudi Arabia at the above site.

Needless to say that it made me sad & has now confirmed by belief that Saudi Arabia is a fascist country.