Lower Manhattan's St. Nicholas Greek Orthodox Church once sat across the street from the World Trade Center's Tower Two. It was leveled during the catastrophic attacks of 9/11.

For years, church officials have attempted to get permission to rebuild. Yet the New York Port Authority and other local bureaucrats have thrown every obstacle in the book at the rebuilding project. They said the proposed new church was too big and its dome too high -- even claiming that the structure could rise no higher than the WTC Memorial. St. Nicholas Church’s difficulty in getting approvals to rebuild stands in stark contrast to the treatment that the developers of the proposed Cordoba mosque have received...

New York City Mayor Mike Bloomberg, state Atty. Gen. Andrew Cuomo, and a raft of city officials have all come out publicly in favor of building the mosque, and the city’s Landmarks and Preservation Commission recently voted unanimously to deny protection to the building currently occupying the site where the mosque is to be built.

The mosque is proposed to rise 13 stories, far above the height of the World Trade Center memorial, with no height restrictions imposed...

...The contrast has not been lost on at least one candidate for Congress. George Demos is a Republican running in New York’s 1st Congressional District... Demos said it is the church that has been unjustly delayed. “One place of worship was destroyed in the attacks. That should be the first thing on that board’s agenda. That should be the first priority,” he said. “There were actually relics of St. Nicholas in that church that were lost in the attacks. Why is it that the same government officials who are so ferverently fighting for the mosque’s right to be built aren’t also fighting for the church to be rebuilt.”

Demos was critical of Mayor Bloomberg’s recent comments on the occasion of the Landmarks Commission vote. In a speech immediately following the vote, Bloomberg said, among other arguments, that allowing the mosque project to go forward would be a victory of sorts over the forces that attacked America on 9/11.

Why would the Ground Zero mosque receive such seemingly special treatment?

An observant tipster notes that Bloomberg's namesake news service has a significant financial interest in keeping those of Middle Eastern heritage happy.

Spurred by a recent boom in sales in the region, Bloomberg is expanding its Dubai office into a regional hub, a move that will as much as quadruple its local staff over the next year. 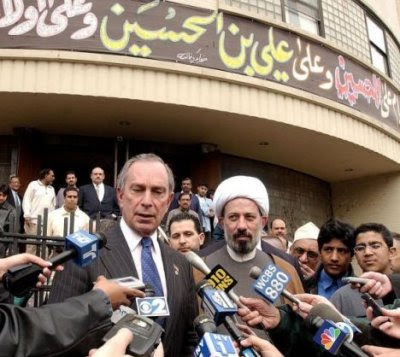 ...The company has ... been developing an Islamic finance portal, which Mr Linnington said would be helped by having more people on the ground building relationships. 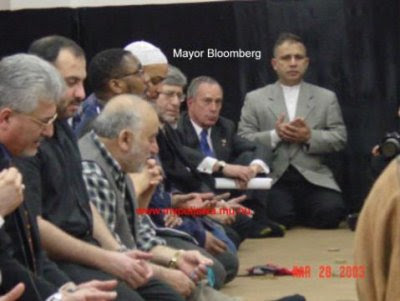 “Particularly since the meltdown of the western capitalist system, there has been an increasingly large focus on the virtues of Islamic finance,” he said. “Today, there is no one single provider of information that caters to the Islamic finance market. So by Bloomberg being here, we are in the process of building out an Islamic finance product. We are very confident that we can build a product that meets the needs of the market right now.”

"Islamic finance" refers to banking systems and investments that are consistent with Islamic law (Sharia). For instance, Sharia prohibits the payment or receipt of interest on money lent. The rules associated with Sharia finance present significant and profitable business opportunities for men like Mayor Bloomberg.

I saw this article last night on Anita Moncrief's awesome site, "Emerging Corruption". I posted it on several other boards and hoped someone would run with it, so I'm glad to see that happened.

I highly recommend her site.

You need to know this:

ZAKAT is the obligatory tax all Muslims pay (usually to their mosques or Islamic 'charities'); it's required in Koran 9.60

Among the uses and recipients of ZAKAT are: the poor, those who collect the Zakat, travelers, those in debt, for release of captives, for 'those whose hearts are inclined to Islam' (this is Dawa, Muslim propaganda for presenting a false image of Islam when proselytizing) AND "For Allah's Cause" --- for JIHAD. ("For Allah's Cause" is a phrase repeated hundreds of times in the Koran and the Hadiths, it always refers to JIHAD as warfare to force people to submit to Islam.

ZAKAT is one of the Five Pillars of Islam (a requirement for all Muslims).

Sharia Compliant Finance requires some portion of profits from any SCF financial service to be donated to ZAKAT. That's why so many Islamic 'charities' have turned out to be conduits for funding terrorism (JIHAD)

Anyone, or any company/service/bank who deals in Sharia Compliant Finance may be an unwitting financial supporter of terrorism against the US and there are criminal implications:

http://www.saneworks.us/uploads/application/28.pdf
"Civil Liability and Criminal Exposure for US Financial Institutions and Businesses Engaged in Shari'ah-Compliant Finance"

Consider this Fox Report: Company Bidding to Help Manage Ground Zero Tower Has Arab Ties ( http://tinyurl.com/29vnvxq )
Enter sharia compliance enforcements such as:
via Bat Ye'or's book "The Dhimmi" ( @ googlebooks online - http://tinyurl.com/2axumyp ) -read (page 179 -" (b) prohibiting the construction of buildings higher than those of the Muslims. They should be only of equal height, or lower" etc. and then go on to read page 193 - "all dhimmis who owned a shop near that of a Muslim, should lower their mastaba (ground floor) so that those of the Muslims would be higher."
Why bring this up?
[continued below due to character limit]

Who's who at Ground Zero planning
a scholar and charity head appointed to President Obama's White House Fellowships Commission is closely tied to the Muslim leaders behind this proposed controversial Islamic
cultural center to be built near the site of the Sept. 11 attacks. The White House fellow, Vartan Gregorian, is president of Carnegie Corp.of New York.
Gregorian also serves on the board of the Sept. 11 Memorial and Museum. The museum is reportedly working with the American Society for Muslim Advancement, whose leaders are behind the mosque, to ensure the future museum will represent the voices of American Muslims.
MONEY TRUMPS PATRIOTISM IN NAME CHANGE TO 1 WTC
". . .the Port Authority decided to rename the "Freedom Tower" at Ground Zero - "One World Trade Center" "As we market the building we will ensure that the building is presented in the best possible way," said PA Chairman Anthony Coscia.
And what, pray tell is the best possible way to present the "Freedom Tower", er, OneWTC?
By ensuring nothing visible from the sidewalk reminds passersby of the horrific act of war committed by Islam on 9/11/2001. You see the 9/11 memorial at Ground Zero is subterranean, buried 70 feet below grade. Can't have anyone link Islam with terror, destruction & triumphalism . So the victims and memories of 9/11 are dead and buried. Out of sight, out of mind. Wouldn't want to upset regulars in the neighborhood (Park51/Cordoba Initiative/wink wink), now would we?
Now, it's bad enough that Bloomberg and company bulldoze opposition at lightening speed, but it's totally understandable since Bloomberg LLC expanding is its financial center to a regional hub in Dubai
Interestingly, Bin Laden/Al Qaeda Funding Ground Zero Mosque Imam Rauf while FoxNews recently revealed Company Bidding to Help Manage Ground Zero Tower Has Arab Ties. In essence, the Port Authority of New York and New Jersey are selling 'management' authority over the WTC re-development to Arab interests. How's that work towards reconciliation and bridge building?
Well, continuing with imposition of sharia standards:
1. In recent negotiations, the Port Authority NYNJ cut the size of the St. Nicholas Greek Orthodox Church, the only church destroyed in this act of war cut it's size slightly and told church officials that its dome could not rise higher than the trade center memorial. Since then, the PANYNJ have decided to not permit this church to rebuild at all.
But a thirteen-story mega-mosque dedicated on the tenth anniversary of this act of war? Fine!

There is so much more . . .Carnegie is in on the sharia finance block and are currently constructing a mega structure with Extell (Carnegie 57/tallest residential structure - what is it with these ME inspired phallic symbols?)
gary barnett - michael bloomberg - robert lieber
“You can see Gary’s fingerprints all over the city in what has been done and will be done.”
Giuliani alone ripped up the check from the Saudi prince after 9/11. Since then, ME oil money saturates NY, blinding NY'ers from all the cleverly veiled sharia strings with which it all comes attached.
These are probably the same foreign men that Matt and Shvo were entertaining at Bagatelle a few months ago - supposedly they spent $90,000 on champagne at a brunch there with a group of Arabian looking men. Looks like it is paying off now that they've got these guys buying their units for $2,000 a foot. link
What a tangled web they weave.