Remember: you'll get to keep your plan if you like it. And your costs won't go up. In fact, they'll go down. Or something. 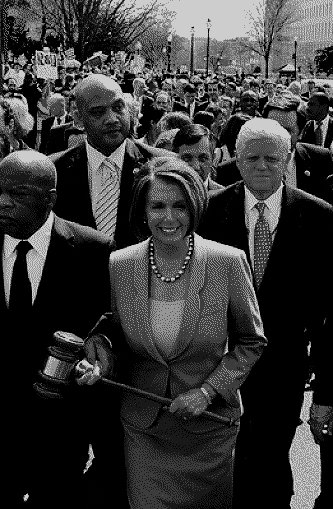 • NC's largest health insurer to cut jobs: "Blue Cross and Blue Shield of North Carolina will contract with Dallas-based Sourcecorp for some data entry work... The company wants to cut its total operating costs by 20 percent, or $200 million, by 2014. That's when much of the federal health care law takes effect."

• WakeMed begins $87M cost-cutting effort: "Wake County's largest hospital system plans to slash annual operating costs by as much as $87 million as it makes changes recommended by an outside consulting firm... efforts likely will include eliminating jobs in some departments... The hospital also may phase out some services where it's not the market leader, such as providing chemotherapy and other cancer treatment."

• Houston Employers chop 17,000 jobs in area: "Finance and health care companies are holding back on hiring because of uncertainties about recent federal regulations, he said. The moratorium on deep-water drilling has also caused energy companies to be more cautious about domestic expansion."

• Latest round of layoffs under way at Addison Gilbert: "CEO warns this week's actions 'only the beginning'... A second round of layoffs began yesterday at Northeast Hospital Corp., as the health care organization looks to eliminate up to 100 full-time positions."

• Unhealthy time for insurance brokers: "Health insurance brokers that serve small businesses and individuals are concerned that new federal regulations due next year could reduce their sales commissions, forcing some out of business and others to lay off employees... Some health insurers that serve Southeast Michigan, including Priority Health, Cigna and Blue Cross Blue Shield of Michigan, already have informed agents of commission cuts, partially because of changes stemming from the recently approved health care reform bill."

• A.M. Best Maintains Negative Outlook for Health Insurers: "A.M. Best Co. is maintaining a negative outlook for health insurance companies. The driving factors are the struggles to grow revenue and the near-term impact from the implementation of health care reform... With the phased-in implementation of health care reform beginning in 2010 and full implementation in 2014, A.M. Best does expect to see some changes. One of the most significant changes in the near term is the minimum medical loss ratio requirement for individual, small and large group segments beginning in 2011. Although the definition of what is included in the medical loss ratio is not yet available, A.M. Best does expect to see margin compression as companies comply. Additionally, A.M. Best anticipates health insurers will try to lower administrative expenses [Ed: i.e., layoff workers] to help offset the increase in the medical loss ratio."

The passage of ObamaCare had nothing at all to do with either health or care. Its intent was to plump the membership of the SEIU as more and more people are forced into government-run health care options like Medicaid, SCHIP and Medicare. More SEIU members translates to more union dues. With more dues comes increased campaign contributions for Democrats. It's a vicious cycle in which average, taxpaying Americans are used as pawns in order to fund Democrat campaign coffers.

I'm waiting for Waxman or Pelosi to start an investigation into why health-insurance companies INSIST on operating in the world of Reality.

The morons who passed this insanity will claim they REALLY HONESTLY BELIEVED that there would be no Unintended Consequences from the swell, wonderful, 2000+ page, un-read, un-analyzed, feel-good legislation that they crammed into law by hook, by crook, by bribery and threat. It goes without saying that these Lib-Prog Lefties believe they can DO NO WRONG!

So, obviously, somebody somewhere is doing this cutting-back just to make our Esteemed Ruling Class look bad! Find the Traitors! Expose their Perfidy! It's the Vast Right-Wing Conspiracy Redux!!!

There is no doubt that 2014 will be a bad year for everybody if reform changes continue.

We need reform, but not a destruction of the system.