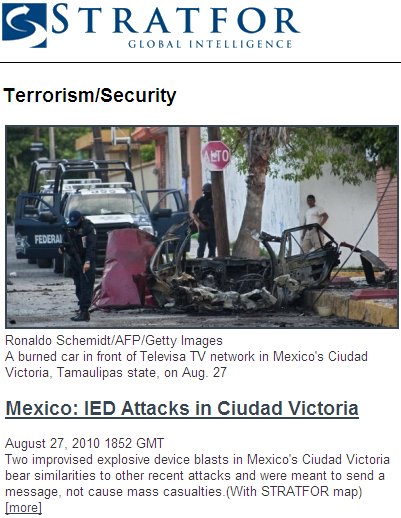 At least two car bombs exploded Friday near the television studios of Televisa in Ciudad Victoria, the capital of Tamaulipas state in northeastern Mexico, authorities said...

Tamaulipas is the state where authorities discovered 72 bodies this week on a ranch believed to be used by narcotraffickers. Authorities are investigating whether the 58 men and 14 women, who were migrants from Central and South America, were killed by the Zetas cartel.

Car bombings are a relatively new phenomena in Mexico.

But, as Big Peace's Frank Gaffney reports, these kinds of attacks shouldn't come as a surprise.

...Iran’s most dangerous terrorist proxy, Hezbollah, is operating with impunity in Latin America. The capture of Nasr comes as the President tells Senator Jon Kyl that the border must remain insecure until he gets a deal from congressional opponents of an amnesty for the many millions of illegal aliens already in this country.

The Nasr arrest also was revealed at the very moment the Department of Justice announced that the federal government was going to sue to prevent Arizona from enforcing federal laws on immigration.

Of course, this makes President Obama's open-borders policy all the more... eh... exciting.

But we already knew that, didn't we?

Obama is right! Using the gunshow loophole, some bad guys bought those assault car bombs in the Texas, and smuggled them into Mexico. When will assault car bombs bought at Texas gun shows be stopped by common sense safety laws! Washington, Chicago, Philly, New York city all have common sense assault weapon, gunshow loophole closing laws and other gun laws so normal people can feel safe that crimnals will not get and carry and use guns in the commission of a crime. Oh, wait...er, it is all Bush's fault!. Yeh, that's it...

more and more the narco terrorists in mehico are using jihado terror tactics.

i think they are getting help from hizballah and al qaeda.

i think the jihadists think they can share the drug $ and then move in as they did in afghanistan.