Please Congratulate Shane Goldmacher, Author of the 'Most Biased Top Story Ever Published In Any Free-World Newspaper'

That is how Tim Cavanaugh describes the verbal stylings of the Los Angeles Times' Shane Goldmacher.

In one of its many books of guidelines, the Los Angeles Times instructs employees to write so that a reader "cannot detect" the political views of the reporter. If there's any place where you'd expect this iron-age rule to be followed, it's in an A1, top-right-column story, which is traditionally considered the leading news story of the day. 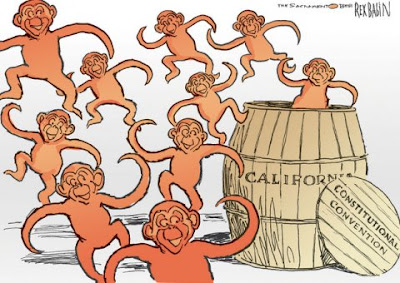 So it's not Shane Goldmacher's opinion, just straight news, that the lame-duck governor of California is sending a "gubernatorial ransom note" and "holding the state hostage" in his budget negotiations, thus repeating a "shameful chapter in California's history" and alienating cooperative Democrats with his "ultimatums." It is furthermore objectively true that Gov. Arnold Schwarzenegger is doing this not just from an honest desire to fix Sacramento's chronic budgeting problems but out of personal pique, that he is trying to retrofit a "fiscal system that has bedeviled California -- and him -- for years."

Sounds even-keeled to me.

Goldmacher seems awfully proud of Blue State governance. From the $578 million K-12 public school building to delayed school payments of roughly $3 billion, there's a lot for him to kvell over.

If you ever find yourself in Goldmacher's presence, please don't mention the public sector unions that control Democrat legislators. He still believes in the Tooth Fairy and the success of socialism.