Blago: Feds should reconsider talk of a retrial or someone at the White House could get hoit 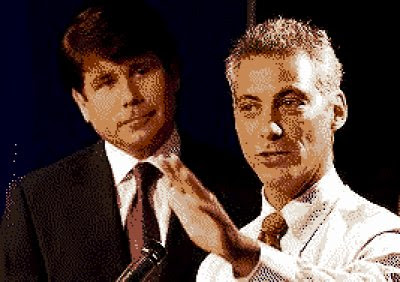 Interviewed on Fox News Sunday, embattled ex-Governor Rod Blagojevich said he would call a a gaggle of high-profile Democrats to testify for the defense should federal prosecutors attempt a retrial.

Former Illinois Gov. Rod Blagojevich said Sunday that he would call a host of high-profile witnesses -- including White House Chief of Staff Rahm Emanuel -- to testify if he is retried on corruption charges.

...Federal prosecutors have vowed to retry Blagojevich after a jury deadlocked on all but one of 24 criminal counts the government brought against the fiery Democrat.

Not named, but likely to be among those considered as witnesses are senior White House adviser Valerie Jarrett -- one of Obama's favorites for his vacated seat -- as well as various SEIU officials.

Or, as I like to call them, Obama's Puppetmasters.

Could Blago's 'threat' have something to do with this?