If you look up schmucks in the dictionary, odds are you'll see this logo. The nutters at Media Matters selectively spliced Jim Hoft's pick-up of this story to apply their typical Streicher-style spin. 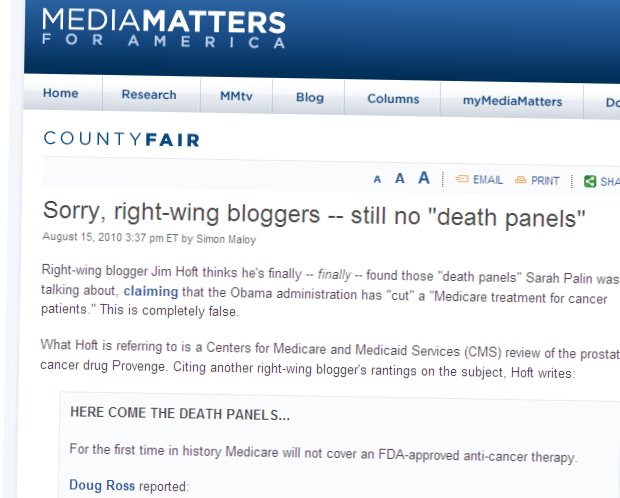 While I appreciate the free P.R., what you'll want to note is what the cretins forgot to mention. That is, the Susan G. Komen for The Cure Foundation -- not exactly a bunch of wingnuts -- are among those protesting the FDA's discontinuation of Avastin "for metastatic breast cancer patients, noting that it is effective for some patients and warning of a chilling effect on new drug development if approval is withdrawn."

The FDA is not supposed to consider costs of treatment. Their mandate is to determine if a drug is "safe and effective," period. If it's safe and effective, it gets approved. Period. That's their job. Officials there recently re-iterated that cost considerations are not part of their mandate.

...This presents a political problem for Obama in the case of anti-breast-cancer drug Avastin. Apparently it's quite expensive. His new head of Medicaid and Medicare, Berwick, who makes a point of talking up controlling costs by denying some treatments, is going to deny reimbursement for an anti-prostate-cancer drug, Provenge. Or, well, they're still mulling it over, which means they're considering not covering it.

And now there is the anti-breast-cancer drug Avastin. Like Provenge, it has already been approved by the FDA. But that creates a political problem -- how can Obama control costs and reassure the public that he's not, as maintained by his critics, denying useful and effective drugs to seniors in order to free up money for ObamaCare?

Oh -- here's a great idea! We'll just get the FDA to rescind its previous approval of the drug so that Medicare and Medicaid don't even have to consider reimbursing for it, thus sparing Obama a political headache, and merely at the cost of taking off the market, from anyone suffering from breast cancer, a drug already deemed "safe and effective" by the FDA.

Federal regulators are considering taking the highly unusual step of rescinding approval of a drug that patients with advanced breast cancer turn to as a last-ditch hope... The FDA is not supposed to consider costs in its decisions, but if the agency rescinds approval, insurers are likely to stop paying for treatment.

This is criminal. To avoid a difficult political debate -- and the honest confession that "bending the curve" of Medicare costs to free up money for ObamaCare is going to require a lesser standard of treatment -- the FDA is killing a safe and effective drug and thereby outlawing for anyone, including those who can be helped by this drug and no other, and who are paying for the drug with their own private insurance or own out-of-pocket money. 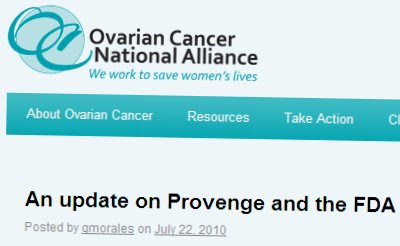 Ace points out that your betters -- i.e., the Maxine Waters and Charlie Rangels of the world, who are above the law -- will certainly have access to any drug they need.

As for the peasants?

We're just numbers in one of Donald Berwick's actuarial tables.

And what will you drones at Media Matters do now? The pencil-necked geek named TBogg appears to have proffered an invitation for you. Of course, it could be time for you to have another slumber party so you can regroup.

I'd like to point out that these drugs are spectacularly expensive and neither cures the underlying disease.

Both drugs can prolong life for about four months at a cost in the neighborhood of $100,000.

It may well be worth it to spend that sort of money if it attracts investment in other drugs and ultimately pushes the cost down.

But that doesn't mean that we don't need to talk about these costs. As we're seeing now, there is not an infinite supply of money to pay for every conceivable misfortune.

Cost-benefit calculations are distasteful at best but we make them all the time.

I'd like to point out that these drugs are spectacularly expensive now. That's the way it works. If you kill these drugs, strangle them in the cradle, then research stops.

While the discovery of penicillin has been attributed to Alexander Fleming in 1928, documentation of the discovery can be found dating back to the mid-1870s. It wasn’t until the mid-1940s that mass production of this life-saving medicine truly came to fruition. Even during the Second World War, with slim availability, there are estimates of 12 to 15 percent of lives saved from use of this medicine.

So, we can extrapolate from these facts that:

1) Based on documentation, it took 70 years from first published discovery to still-expensive and difficult-to-manufacture mass-production.

2) It took close to 20 years from attributed discovery to the aforementioned mass-production.

We had good knowledge all the way back to 1875 that there was something to this mold thing. By 1930, it was being used as experimental treatment. By 1945, it was a proven treatment … and spectacularly expensive.

I’d like to point out to Rob that his current line of thinking would have penicillin still spectacularly expensive – if available at all – today.

I’d like to point out to Rob that the government has just made an about-face on this treatment with no discernable studies to precede the decision and in direct conflict with the opinion of many qualified experts.

I’d like to watch Rob make his point to a group of men who have lost their wives to breast cancer and have them explain to him what a difference an extra four months would have meant to them.

I’d like to point out to Rob that unless he has dealt with a serious medical condition while being covered by Public Access (government provided) insurance, then he ought to keep his trap shut.

So, the summary of this blog entry is (1) the government should continue to pay for treatments that are ineffective because it provides a profit to the manufacturer of the drug. (2) By rejecting Avastin for treatment of breast cancer, FDA rejects all breast cancer treatments, because Avastin is the only drug for treating breast cancer.

You and truth aren't on a first-name basis, are you, Mr. Ross?

Hey Powem (your nickname was Schmuck in high school, right?)

It's not me saying it, it's the Susan G. Komen For the Cure Foundation.

Avastin is approved for use in treating several cancers, including those of the colon, lung, kidney and brain. So doctors could continue to write prescriptions for it for breast cancer, as an "off-label" use. But in addition to prompting insurers including Medicare to stop paying for Avastin, an FDA revocation of approval for its use in breast cancer treatment might mean that breast cancer patients would lose eligibility for a program in which Genentech caps the annual cost of the drug at $57,000 for women with annual incomes of less than $100,000.

That prospect has prompted despair among women taking the drug, some of whom have started petition drives to persuade the FDA to ignore the advisory committee's recommendation.

"I'm very upset," said Leslie Twohig, 48, of Lothian, Md., who has been taking Avastin for eight months and credits the drug with helping her survive. "How long will I be able to stay on Avastin? Are they going to take it away? I know it's working for me. Right now I am able to enjoy my life. Every morning I wake up and wonder how long it's going to go on."

"I am very concerned about people who are receiving the drug and may feel threatened that they may not be able to receive," said the Dana-Farber Cancer Institute's Winer, who is also chief scientific officer for Susan G. Komen For the Cure, a breast cancer patient advocacy group. "This is not a worthless drug by any means. There is almost certainly a group of women who get a big benefit. "

Several members of Congress have sent protest letters to the FDA and the Department of Health and Human Services.

Now, dirtbag, I mean schmuck, why don't you do some reporting of your own on why the Komen foundation is a shill for the right-wing?

The FDA is now the Death panel- Obama has got them to do his dirty work so he and Obamacare won't be blamed.This is an abuse of power.

I'd like to point out to Rob that this is the free market. Insurance and drugs are products; some people are going to be able to afford them and some won't. How about you speak for yourself instead of trying to speak for everyone?

What is abhorrent about this Avastin issue is that the government has no right to strip an effective cancer treatment off the market -- one that's already been FDA approved -- because it deems it too expensive. That's not the government's responsibility, nor should it be. Frankly, if it IS too expensive, no insurance company would pay for it and the manufacturer would be forced to re-figure the price somehow. That's the free market. That's how capitalism WORKS.

We pay insurance premiums so that we can avail ourselves of adequate coverage should we suffer an illness or injury. Insurance companies function and are able to PAY for these treatments because the vast majority who pay insurance premiums are not ever going to need access to treatment for catastrophic illnesses. Obamacare will destroy that system. To make this a little less obvious and to underpin the bottom line, Obamanomics requires the restriction or outright removal of costly treatments. By doing so, people who might have lived a little longer -- who might have had a chance to find a bone marrow donor, attend their child's college graduation, receive a liver transplant, celebrate their 50th wedding anniversary -- will die. Not because the drug that might have prolonged their life was ineffective or unsafe, but because their life was deemed unworthy of the expenditure.

The bottom line is this: if the drug works, it should be available. If government insurance won't cover it, then private insurance will. If private insurance won't cover it, then individuals should have the option to pay for it themselves, even though the costs are astronomical. That's where charities and local bake sales and fundraisers come into play; TRUE charity, not government-subsidized "charity." Let ME decide to donate my money to an organization that will use it to help fund expensive cancer treatments for the uninsured. Let ME put my money to work. Don't take my money by taxing me to death. Don't use my taxes to fund a state-run welfare fraud that will doom that same patient to an earlier demise because the drug that could have saved them is deemed "too expensive." That's an insult to my intelligence, my dignity, and to the hard-working, charitable essence of what has made this country great.