RUSH TRANSCRIPT: The following is the text of the Reverend Al Sharpton's spoken speech, transcribed from my recording, in between rounds of beer pong in a DC bar.

I am happy to speak to you today in what will be recorded as the most bitter, self-serving speech in the history of our nation. 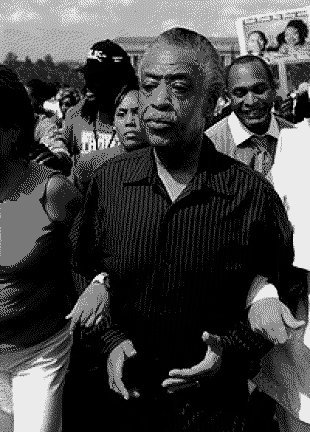 Two score and two months ago, a black American, in whose symbolic shadow we stand today, was elected President. That momentous day does not diminish the fact that most Americans are still quite racist. To acknowledge otherwise could negatively impact my cash flow, which is dependent upon hatred and divisiveness.

You see, one hundred and forty years after the Emancipation, we have made no progress whatsoever. All of the blood shed during the Civil War, all of the Civil Rights marches, all of the blacks elected to high office and who have achieved great material success in the United States, truly you must ignore all of these momentous milestones, because I am still heavily invested in grievance-mongering.

If I were to demand Charter Schools in every inner city school district, so that every child could have a chance to succeed, where would that leave me? Without the support of the teachers' unions, that's where!

If I were to demand an end to unlimited welfare, which breeds a culture of dependency and despondency, where would that leave me? Without swarms of single-parent families that populate my armies of illiteracy, crime and violence, that's where!

If I were to demand a return of prayer to school and the inclusion of faith as the moral foundation for our country's unity, as did this nation's founders, where would that leave me? Without the support of the secular, progressive media, that's where!

It would be fatal to my pocketbook if I were to acknowledge the great progress that has been made. So what I must do, what I will continue to do, is to sow division, to diminish this country's advances, to play the race card with every hand. Joining me in this effort: the once-proud NAACP, La Raza, LULAC, and other separatist front groups, many of them working covertly for foreign governments.

We have come to our nation's capitol to balkanize this country, to divide it into arbitrary segments of the abused and the abuser, whether real or not. Rich vs. poor, black vs. white, fat vs. thin, illegal immigrants vs. citizens, trial lawyers vs. doctors, Christians and Diamond Merchants vs. Muslims, and so on. Because once we find a scapegoat, we can demonize, polarize and destroy it.

It would be fatal for the nation's media to overlook the urgency of this moment. I have survived the Tawana Brawley debacle, various problems with the IRS, and that inconsequential "Kill the Jew" incident at Crown Heights, all with my dignity intact and my media credentials in good order. For Glenn Beck, you're willing to throw all of these qualifications away?

I say to you today, my friends in the media, even though I have become a walking punch-line (as evidenced by this tiny crowd), go back to your offices and report upon my message. Go back to The New York Times, CNN, The Washington Post, and MSNBC and promote my message of division, jealousy and hatred.

I say to you today, my friends in the media, even though we face difficulties -- most especially the fact that more and more people of every race, creed and color are learning the wisdom of the conservative message -- I still have a scheme.

I have a scheme that one day even more children will be forced into public schools with no choice in the matter.

I have a scheme that one day even more single-parent families will be created through unlimited welfare and publicly incentivized sloth.

I have a scheme that one day God will be completely removed from the public square, because faith is the enemy of the Statist.

I have a scheme that one day I will have a multi-million dollar mansion in a lily-white, gated community like Jeremiah Wright's beautiful home.

I have a scheme that involves wealth redistribution, with much of the wealth being redistributed to me.

I have a scheme that one day this nation will be completely Balkanized, with dozens of ethnicities, races, colors, religions and creeds all warring for their slice of the public trough.

Let race-baiting sing from the above-the-fold page A-1 of the New York Times!

Let race-baiting sing from the hallowed mouth of Katie Couric!

Let race-baiting sing from the President himself and his minions!

And when this happens, when we allow race-baiting to sing its siren song, when we let it sing from every village and every hamlet, from every state and every city, we will be able to speed up that great day of which Alinsky spoke. When this capitalist and imperialist society finally collapses, replaced with an authoritarian regime of the kind for which Thomas Friedman has pined. On that day, we will be able to survey the Tower of Babel society that we have created and revel in the words Statists have longed for, "The Constitution is Dead At Last. Dead at Last! The United States is Dead At Last!"

Linked by: American Digest. Thanks!

Apparently the US government has a scheme:

Can't anyone stop this insane outflow of US taxpayer money?

Hey! This has to be a great country, right?

I mean where else can grifters like Jackson and Sharpton get away with interstate fraud by calling it a movement for equality?

Um, I'm pretty certain a 'score' is twenty. At this point I don't think President Obama (PBUH) was elected 42 months ago.
Though it is a pleasant thought...