Just one Presidential motorcade during rush hour is all it takes to set Los Angeles afire, rhetorically speaking.

He also alienated some Angelenos, at least temporarily, as his motorcade mangled evening traffic en route from the Beverly Hilton to the Hancock Park home of producer John Wells, whose credits include “West Wing,” “ER” and “Southland.”

The glitterati paid through the nose, 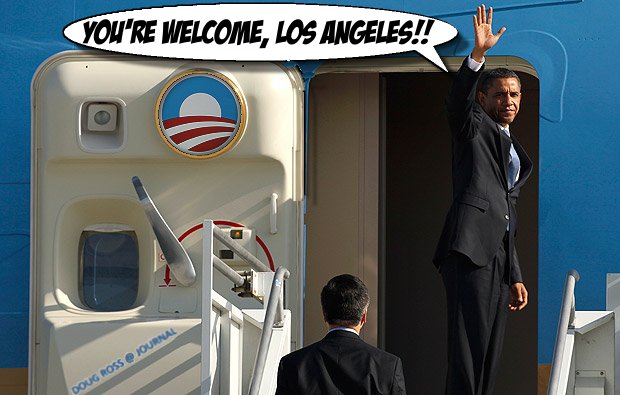 The entry fee was $2,500, but co-hosts — including Abrams, Steven Spielberg, Jeffrey and Marilyn Katzenberg, and Barbra Streisand — paid $30,400 a couple. They didn’t all attend, however.

The ones who didn’t attend were probably stuck in traffic, along with the hoi polloi.

It takes little effort to cause a traffic jam at rush hour in LA, but the mark of real talent is causing gridlock for cars while blocking pedestrians:

Although it was a friendly crowd, the street closures snared not just vehicles but pedestrians — if calls, e-mails and posts to The Times’ website were any guide.

Yes, Los Angeles is fuming, but remember: it's for the children.