Congratulations, conservatives: if you disagree with President Obama's policies, you're not just racists, you're also birthers

With his supply of straw men seemingly exhausted, President Obama has resorted to even sillier method of avoiding policy debates: playing the 'birther' card.

Whether one likes Obama or not, he was clearly born in the US and therefore eligible for office... However, the birther contretemps suits Obama, because it allows the media to dismiss all of his critics by painting them with the Birther brush (which is why so many of us are frustrated and disgusted by the small coterie of people who continue to indulge it). Obama could put an end to it at any time by simply releasing his original birth certificate from Hawaii, which only he can authorize. Why doesn’t he do it? Because the Birther movement suits his purposes. 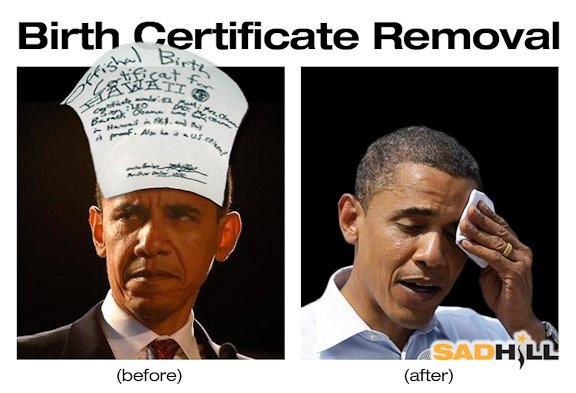 So when he made this complaint last night, it’s not just amateurish, it’s completely disingenuous... "I can’t spend all of my time with my birth certificate plastered on my forehead,” quipped Obama, who took a deep breath to gather his thoughts when asked if the poll reflected his inability to communicate with voters."

Er, he hasn’t spent any time with a birth certificate plastered to his forehead, and purposefully so. We understand why, and it makes some strategic sense in the most cynical manner possible. It allows Obama to nurture that microscopic collection of fools to distract attention from his own failures. But if one plays that game, then one gives up the right to whine about it later... [and as] Twitter follower RobRob points out, this was also a non-sequitur response to a question about Obama’s faith.

The president's use of the birther card follows close on the heels of his of raceploitation, most notably in his call for support in the 2010 midterms.

The Democratic National Committee this morning released this clip of the president rallying the troops, if rather coolly, for 2010. Obama’s express goal: “reconnecting” with the voters who voted for the first time in 2008, but who may not plan to vote in the lower-profile Congressional elections this year. 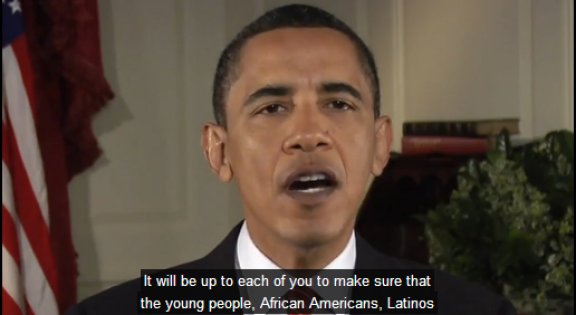 Obama speaks with unusual demographic frankness about his coalition in his appeal to “young people, African-Americans, Latinos, and women who powered our victory in 2008 [to] stand together once again.”

Yep, I'm one of those who has looked at what evidence there is about where Obama was born and have concluded, beats me.

Which when you get right down to it is a problem. Why should I have doubts about so fundamental a question as to where my president was born?

So you're exactly right, we have Obama doing exactly what he needs to do to keep birthers in the news and with that, attempting to smear all conservatives with this seemingly tin foil hat issue. An issue he could resolve in a second.

OTOH, while I have to wonder at numerous nuggets out there that give credence to this question, foremost among them just why has not one doctor or nurse that attended the birth stepped forward to get some "coolness" Or for that matter why hasn't the hospital that would have a record of this birth not stepped forward for the plaque that Obama himself, would personally nail to their wall.

None the less, some day it will come out but for now the thought that Obama would be frog marched out of the WH pains me. It would make the biggest asshat President in our history an instant martyr. And two, the wonderful lesson that even teacher's unions's zombies are having a hard time turning away from, playing out nationally as a result of these socialist policies, would be lost in the ensuing ado.

I like him twisting like he is now just fine. I only hope his blow up(he is very thin skinned) is caught on video.
MM

The only place in the US Constitution where citizenship is defined is in the 14th Amendment.

It's that part '....and subject to the jurisdiction thereof...' is where the confusion sets in. When asked for clarification of this phrase, Sen. Lyman Trumbull, Chairman of the Judiciary Committee, author of the 13th Amendment, and the one who inserted the phrase in the 14th replied:

Can you impeach someone who was never qualified to be president in the first place???

And of course, the question I've asked many times but never had answered...

What happens if it can be established that he was never qualified for the office? Doesn't anybody wonder about that?